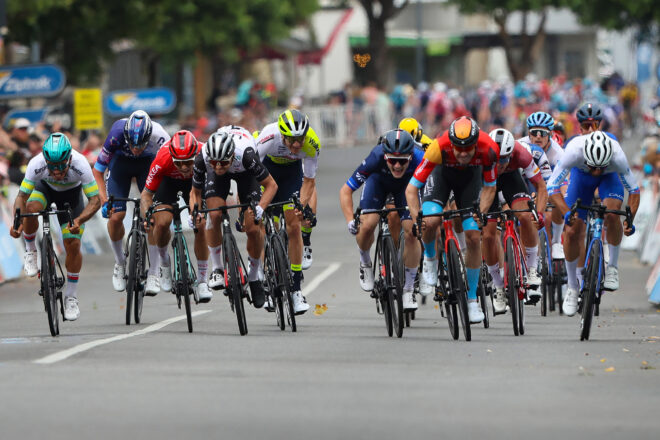 Phil Bauhaus won stage 1 of the Tour Down Under in a bunch sprint, beating Caleb Ewan(UniSA-Australia) and Michael Matthews (Team Jayco AlUla) into Tanunda. Thanks to this victory, Bauhaus leads the points classification in Santos Tour Down Under and ticks off the first win of Team Bahrain Victorious in the 2023 season.

In the final kilometres, Bauhaus was well placed in the peloton just behind the train of Soudal-Quick Step and Team Jayco AlUla, while Nikias Arndt was at the front leading out for him. Around three hundred metres from the finish line, the German launched his sprint, edging the Australian duos and showing he was the fastest sprinter in the field, clinching his first victory in TDU.

“Today was super nervous, a lot of guys, unfortunately, went down. I crashed pretty bad like it was big impact, but I could recover. The team did a really good job. We were always in the front in the last lap. At Schwalbe Classic, I waited too long, so I just went with 300 meters to go. It was really close to Caleb Ewan, but yeah, I am super happy.”