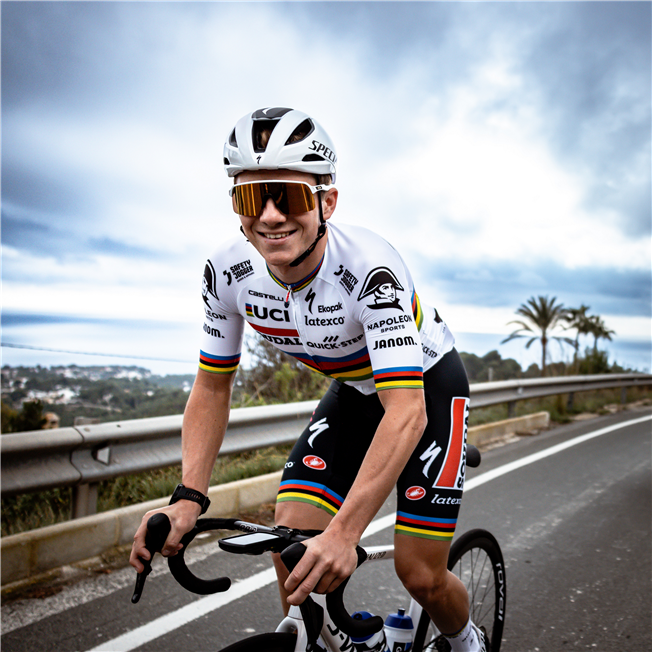 One of the most coveted garments in sport, the rainbow cycling jersey denotes the reigning World Champion of the discipline. The honour of adorning the famous jersey in 2023 as Men’s Elite World Road Race Champion falls to 22-year-old Remco Evenepoel, who will keep the tunic within the team for the third straight season.

Designed and produced in conjunction with our clothing partner Castelli, the jersey will for first time adorn the team’s new name of Soudal Quick-Step, with the Belgian based Soudal joining as lead co-title sponsor, alongside Quick-Step, a name now synonymous with cycling. The team has the classic black and white look aside from the red of Soudal and the multi-colored stripes denoting the World Champion, and have paired with black shorts to complete the stylish and classic look.

In a video made by the team, Remco tells of his thoughts on wearing the jersey going into the new season, following his win at the World Championships on that fateful day in Wollongong, last September, when he attacked alone with more than 25 kilometers to go and triumphed by over two minutes – the biggest winning margin at the event since 1968.

This came hot on the heels of his win at La Vuelta earlier in that month, which saw him become the first Grand Tour winner in the team’s twenty-year history and the first Belgian in more than four decades to conquer a three-week race. Evenepoel – the youngest rider in history to win a Monument, a Grand Tour and the Worlds in the same season – will hope to follow up this success at the Giro d’Italia, which it was recently announced he would ride in 2023, his fifth year with the Wolfpack.