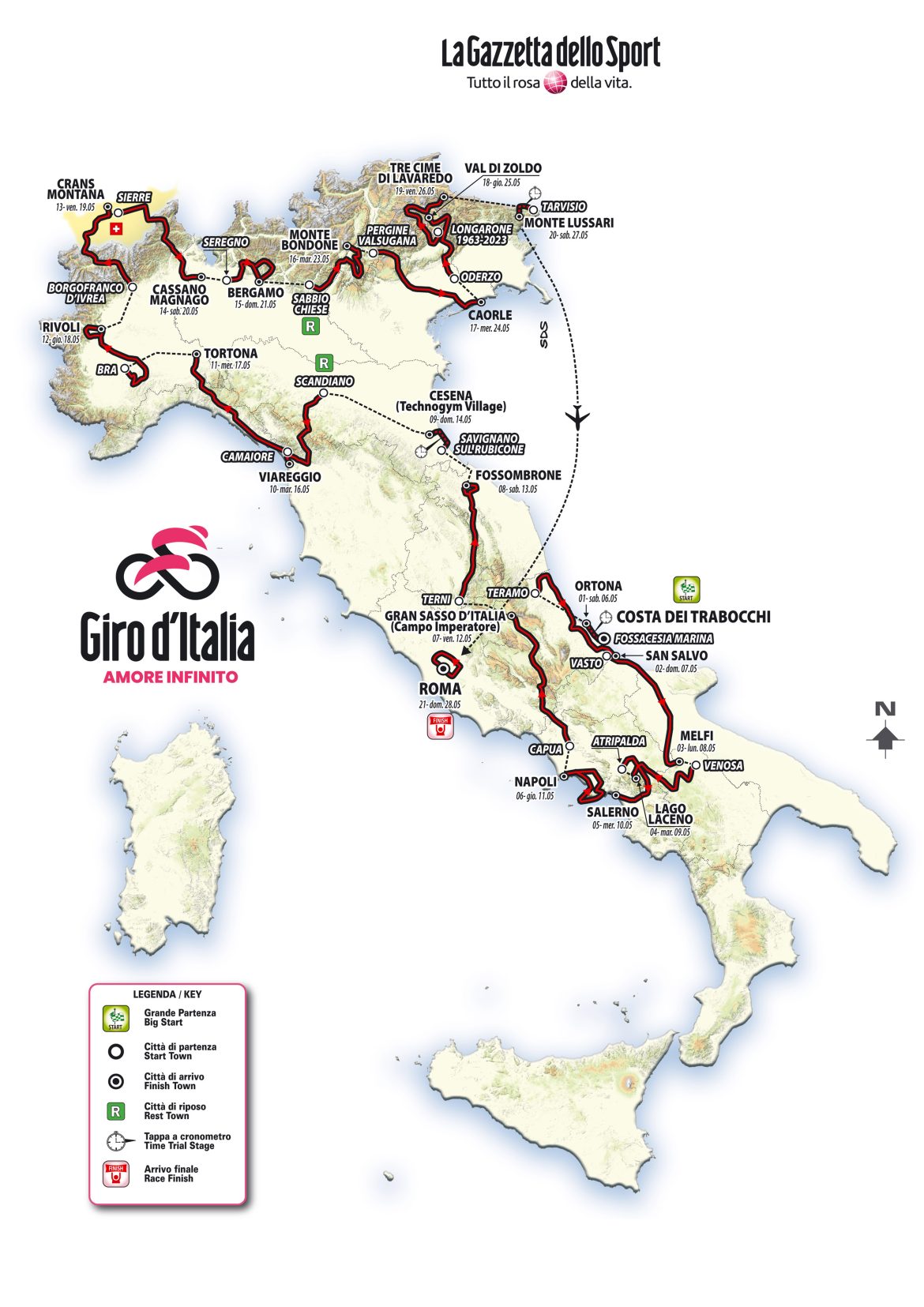 The route of the 106th Giro d’Italia has been unveiled. The 2023 Corsa Rosa will feature eight stages suitable for sprinters, three time trials that total 70.6 km (including the time trial of Mount Lussari), seven mountain stages, with as many uphill finishes, and four intermediate stages. Riders will climb a total of 51,300m in vertical elevation and cover a distance of 3,448.6 km. The Grande Partenza will depart from the Abruzzo region, and begin with an individual time trial along the Costa dei Trabocchi cycle path. Throughout the race one stage will pass through and finish in Switzerland, with an uphill finish in Crans Montana, on the stage of the 2023 Cima Coppi: the Gran San Bernardo pass (2,469m). The grand finale of the Corsa Rosa will end in Rome for the fifth time in its history.

The route of the 106th edition of the Giro d’Italia, taking place from 6 to 28 May 2023, was presented today at the historic Teatro Lirico Giorgio Gaber, in the center of Milan. Presenting the route, Cristina Fantoni and Paolo Kessisoglu were joined by many well-known faces in sport, entertainment, institutions and companies, all of whom are part of the great Giro d’Italia family. On stage, the 2022 winner of the Giro d’Italia, Jay Hindley appeared alongside fellow podium winners, Arnaud Demare (winner of the Maglia Ciclamino) and Koen Bouwman (winner of the Maglia Azzurra). Vincenzo Nibali and Alberto Contador also made appearances, together with Urbano Cairo, the President of RCS Mediagroup, Paolo Bellino, the CEO of RCS Sport and the Director of the Giro d’Italia, Mauro Vegni.

For the second time in its history, the Giro d’Italia will start from the Abruzzo region, after its first time in 2001. Stage one, on Saturday 6 May, is an individual time trial and runs almost entirely along the Trabocchi cycle path, retracing the disused Adriatic railway. The first section is entirely flat with views over the Trabocchi and the sea, and looks toward the port of Ortona. The road then climbs for just over 1 km, until arriving into the finishing straight, in the Ortona city center.

THE GRANDE PARTENZA
For the second time in its history, the Giro d’Italia will start from the Abruzzo region, after its first time in 2001. Stage one, on Saturday 6 May, is an individual time trial and runs almost entirely along the Trabocchi cycle path, retracing the disused Adriatic railway. The first section is entirely flat with views over the Trabocchi and the sea, and looks toward the port of Ortona. The road then climbs for just over 1 km, until arriving into the finishing straight, in the Ortona city center.

On Sunday 7 May, the second stage starts from Teramo, and is one for sprinters in the peloton. Featuring a wavy profile in the first section, the stage then follows the coast, with excursions inland to climb Silvi Paese, Chieti and Ripa Teatina. Finally, continuing along the coast, the riders will reach the promenade of San Salvo Marina.

THE FIRST WEEK
Starting from Vasto, the route travels south to reach Melfi in a stage divided into two parts. The first is completely flat, all the way to the entrance to Basilicata. Here is where the Vulture mountains start. Riders will cross the Monte Vulture massif touching the Monticchio Lakes before descending to Rionero and Rapolla, before the final ascent to Melfi.

The following day is a stage in the Apennines, with a series of climbs totalling 3500m in vertical elevation. From Venosa, and leading to Lake Laceno, this is the first uphill finish of this Corsa Rosa.

Wednesday 10 and Thursday 11 May will provide two opportunities to the fastest wheels in the peloton. The two stages are from Atripalda to Salerno and Napoli to Napoli (although this is not entirely flat).

The second uphill finish of the Giro d’Italia, and the first above 2000m, is in Campo Imperatore on the Gran Sasso d’Italia (2135m). Starting from Capua, the peloton will face the climbs of Roccaraso and Piano delle Cinque Miglia before a very long descent to the foot of the Gran Sasso. The ascent to Campo Imperatore is an endless climb of almost 45 km.

Saturday 13 May sees an undulating stage from Terni to Fossombrone. It features the Muri (“walls”) of the Marche, and includes 2,500m of vertical elevation, all within the final 60 km. Riders will be challenged to the ascents of the Cappuccini (about 3 km, with gradients up to 19%) and Monte delle Cesane (approximately 7km, with gradients up to 18%). Following Montefelcino, they will return to the Cappuccini ascent, placed 5 km from the finish.

THE SECOND WEEK
The first rest day is on Monday 15, and the two following stages, on Tuesday 16 (Scandiano to Viareggio) and Wednesday 17 (Camaiore – Tortona) will appeal to the sprinters. On Thursday 18 May, the Bra to Rivoli stage is mixed, and open to many opportunities. After the first hilly section, the route continues for about 60 km, crossing the Po Valley and passing the finish line. Riders will then tackle the challenging climb of Colle Braida, and pass alongside the Sacra di San Michele, with the final 20 km undulating, until reaching Rivoli.

The following day is an alpine stage, from Borgofranco d’Ivrea to Crans Montana, in Switzerland. The route will climb the Colle del Gran San Bernardo (the 2469m Cima Coppi) and totals 34 km long, without excessive slopes, then the Croix de Coeur (15 km and 1350m in elevation). After a second descent, totalling 22 km, there is a short flat final ascent to Crans Montana from an unprecedented side.

Another stage suitable for sprinters is one that will start from Sierre to Cassano Magnago before the “mountain in the city” stage, from Bergamo to Bergamo, on Sunday 21 May. Although characterised by fairly simple climbs, they’ll offer opportunities for any type of attack. The stage features the Valcava and the Selvino, before descending on Bracca and Sedrina and returning to Bergamo to cross the finish line (strappo della Boccola). Riders will then tackle the Roncola from the Barlino side, and descend back into Bergamo, eventually arriving in the city.

THE LAST WEEK
After the final rest day, the second mountain stage of the Giro d’Italia awaits the riders. The Sabbio Chiese to Monte Bondone stage takes place all at relatively low altitudes, but accumulates over 5000m in vertical elevation. The route is divided, with several very hard climbs and others with more gentle gradients. The first section, along the western coast of Garda, reaches Trentino in Riva del Garda, then the Passo di Santa Barbara (around 10% gradient), eventually reaching the Passo di Bordala. A fast descent to Rovereto enters Vallarsa where riders will turn towards the Folgaria plateau and pass through Serrada. The challenging descent to the Adige valley in Calliano leads to a climb to Monte Bondone from the Aldeno side (gradient up to 15%). Wednesday 24 May sees another completely flat stage from Pergine Valsugana to Caorle.

Stage 18 is a short but intense mountain stage, from Oderzo to the Val di Zoldo, and features 3,700m of vertical elevation. Riders will take on the Cansiglio climb (Passo la Crosetta) and enter the Alpago area and Piave valley. After Longarone, the route touches Pieve di Cadore and climbs the Forcella Cibiana and, after Forno, with the climb of Coi (4 km over 10%, peaking at 19%) there is just 5 km before the finish line.

Friday 29 May is the Dolomitic Stage of the Corsa Rosa, from Longarone to the Tre Cime di Lavaredo (182 km and 5,400m of vertical elevation). After the approach through the Agordino, a series of climbs start in Arabba, including the Campolongo Pass and the Valparola Pass, before the “Scala Santa” of the Dolomite climbs, with Passo Giau (Selva di Cadore side about 10% average gradient) and the Passo Tre Croci and Tre Cime di Lavaredo with its slopes up to 18%. For 2023, the 60th anniversary of the Vajont tragedy will be commemorated.

After the Dolomitic stage, a very demanding individual time trial from Tarvisio to Monte Lussari, with approximately 1050m in vertical elevation. The first 10 km is on a flat, light descent along the Alpe Adria cycle path, before reaching the Saisera stream (Intermediate timekeeping). The route features around 8 km of paved concrete leading to the Sanctuary. This uphill stretch of 7.5 km has an approximate 12% average gradient. The first 4.8 km reach approximately 15% (comparable to the central stretch of the Zoncolan). A wavy final section with a short climb (up to 22%) at the entrance to the town is followed by a short descent, and then a final climb to the finish line.

The final stage of the 2023 Giro d’Italia will finish at the Imperial Forums in the country’s capital, Rome.