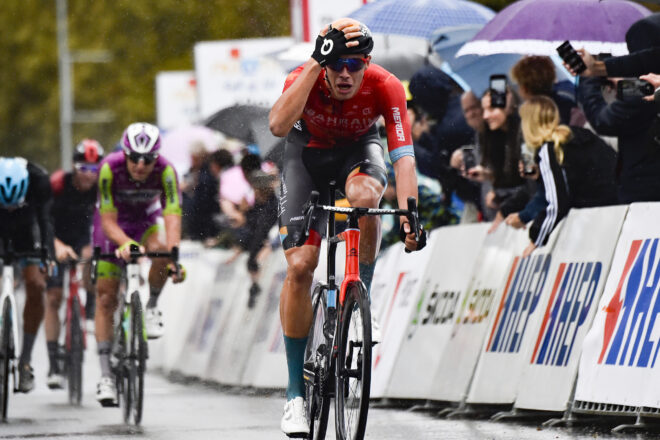 A year after Phil Bahaus claimed the opening stage at the CRO Race in 2021, young Italian Jonathan Milan followed suit in this year’s edition, taking his first pro win and moving into the race leader jersey.

The 21-year-old has been close to his first pro win in recent races with a few podium place finishes at the Deutschland Tour and Tour de Pologne, and with only victory missing, Milan was able to taste victory at the finish line in Ludbreg after over 220km of racing.

Stage 1 was one for the fast men on paper, but after a long day on the saddle on a pan-flat course, a tricky finale was in store for the peloton, with a final two 13km loops, including a short ascent. After the day’s breakaway was caught, Bahrain Victorious tried to make the race harder and make a selection towards the finish. On the last descent, Mohorič tried to get away with his excellent descending skills to go solo, but the teams behind had every intention to close the gap and fight for the sprint.

With the race coming back together, Milan took advantage of the sprint, opening up at the right time with impressive acceleration to take a memorable first pro win in Ludbreg, as his father and grandfather were cheering him on at the finish line.

“I can’t believe I did it! This is something incredible. I had a difficult first part of this season, and I have been looking for this victory for a long time. I was close to it one month ago at the Tour de Pologne and then at the Deutschland Tour. I was always on the podium but never on the first step. I desired the victory and wanted to have it here, as this CRO Race is so important for us. I was feeling super good today, and my legs were so strong! I think also the team did a fantastic job. Everyone gave their 100%. I’m super proud of everyone, and I am so happy about this! So thanks to everybody, and tomorrow I want to try again”.

“Everything was done as we planned,” Bahrain Victorious Sports Director Gorazd Stangelj says. “Jonathan was our man for today’s finale, and the team worked to protect him and our GC men, Mohorič and Buitrago. They controlled the race from the beginning, with Maciejuk and Miholjevic debuting with the team, and then on the circuits, with especially Caruso making the race hard for our rivals. In the end, Milan was simply fantastic. It’s nice to start like that this Cro Race”.