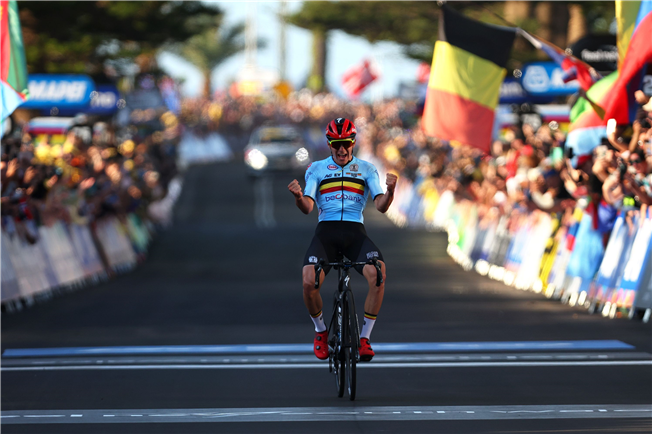 Remco Evenepoel blazed into the history books Sunday, when he soloed to victory in Wollongong and brought home a world title that his home country had been waiting for since 2012. Just two weeks after becoming the first Belgian in 44 years to triumph in a Grand Tour, Remco scored his 15th win of the season – again, in spectacular fashion – and made sure the prestigious rainbow jersey remained in the Quick-Step Alpha Vinyl Team.

It was the crowning achievement of what has already been a stellar season for the 22-year-old from Schepdaal, only four years after his Junior World Title, a performance not seen since the ‘80s. The dominant victory, which came after a 25km solo ride, also saw Evenepoel join a select group of riders who have won a Monument, a Grand Tour and the World Championships in the same season – another confirmation of his huge talent.

“This is a dream, it’s just unbelievable! After a Monument and a Grand Tour, now I’ve also won the Worlds! I won all the races I dreamed of this year and I don’t know if I’ll ever have another season like this again, so I want to enjoy every moment of it. It’s been a long year and it’s amazing to finish it off like this”, said Remco, the first rider in history to win La Vuelta and the Worlds in the space of just weeks.

One week after capturing the bronze medal in the individual time trial race, Remco started the 266.9km road race as one of the main favourites, and with 75 kilometers to go joined a strong group that powered away from the peloton and bridged across to the original breakaway, where he linked up with Pieter Serry, who did some strong pulls that took the advantage to more than two minutes. After his teammate peeled off the front, Evenepoel was one of the most active riders in the group, shutting down several accelerations and putting in a couple of digs of his own, which helped the leaders maintain their comfortable margin over the bunch.

Then, on the penultimate lap, just before the short but sharp Mt Ousley climb, he took off and was joined only by Alexey Lutsenko, and after a couple of kilometers of sharing the workload, he rode the Kazakh off his wheel, going into time trial mode and ensuring himself an unassailable lead with just one lap to go. As the kilometers ticked off, nothing and no one could stop Remco from powering to a historic success, and the Belgian phenomenon claimed the victory at the end of a sensational ride by more than two minutes, the biggest winning margin at the World Championships since 1968.

“After making my move and being joined by Alexey, I realised that I wanted to be alone, so I attacked again, on the climb this time, and once I had a margin I just kept pushing. On the final lap I felt my legs exploding, but I knew I was close to the finish, so I was quite confident. Winning the rainbow jersey is something I’ve been dreaming about and I got goosebumps when I arrived at the finish, knowing what I had achieved”, added Remco, the fifth different rider in the history of our team to become Road Race World Champion.