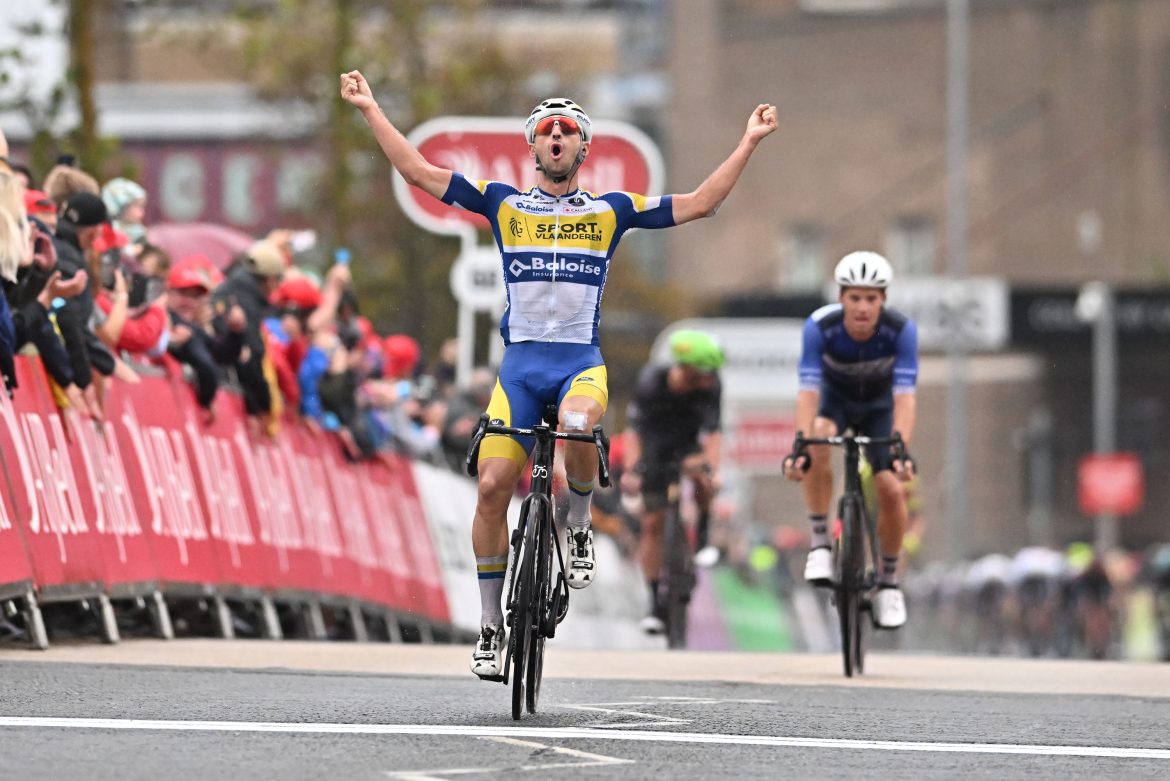 Belgian rider Kamiel Bonneu claimed the biggest victory of his professional career as a four-rider breakaway group ripped up the script on stage three of the AJ Bell Tour of Britain in Sunderland on Tuesday.

There was added drama as Israel – Premier Tech’s Corbin Strong was initially awarded the red AJ Bell leader’s jersey for a third day before the UCI commissaires panel reviewed their decision almost two hours after the conclusion of the stage.  As a result, Perry takes a seven second lead over Strong, with Paasschens a further four seconds back, and Jake Stewart the highest placed Brit fifth at 15 seconds.

The change gives British domestic team Wiv SunGod the lead in AJ Bell Tour of Britain along with the Sportsbreaks.com Sprints jersey with Matt Teggart and the ŠKODA King of the Mountains jersey with Jacob Scott.

Stage three was tipped to culminate in the first conventional bunch sprint of this year’s race, but the quartet managed to hold off the peloton following a dramatic final 50 kilometres that saw torrential rain sweep the race as it approached Sunderland.

But, having broken clear approaching the town of Tow Law following a frantic start to the race, the four riders had a three-and-a-half-minute lead going into the final 30 kilometres, which fell dramatically as the cooperation between the quartet subsided.

“We are a small team, we don’t win that much. So it’s always nice to get a win and especially in stage race like this. I think it’s a really nice stage race – it’s really awesome to win.”

Bonneu’s win came despite the break losing nearly two minutes of their advantage in the final four kilometres, with a lack of cohesion looking to have cost them the chance of victory with BORA – hansgrohe driving the peloton on through the rain.

“We discussed at the beginning of the stage that Mathijs and the guy from SunGod, will go back after the third sprint because they were really close in the GC, but then we had such a big gap that they said ‘we’re not going to go back.’ I completely understood them, but Richardson said ‘Okay, if you’re not going to keep your promise then I’m not going to work with you!’ It’s his decision and I don’t mind because I won.”

Bonneu also praised the British spectators, who again turned out in force despite what had started as a sunny morning outside St Mary’s College in Durham turning into another day of rain-lashed action.

“It’s crazy,” continued Bonneu. “I think if this was in Belgium nobody would go on the streets, but here everybody is on the streets. It’s crazy how many people show up! It’s really nice.”