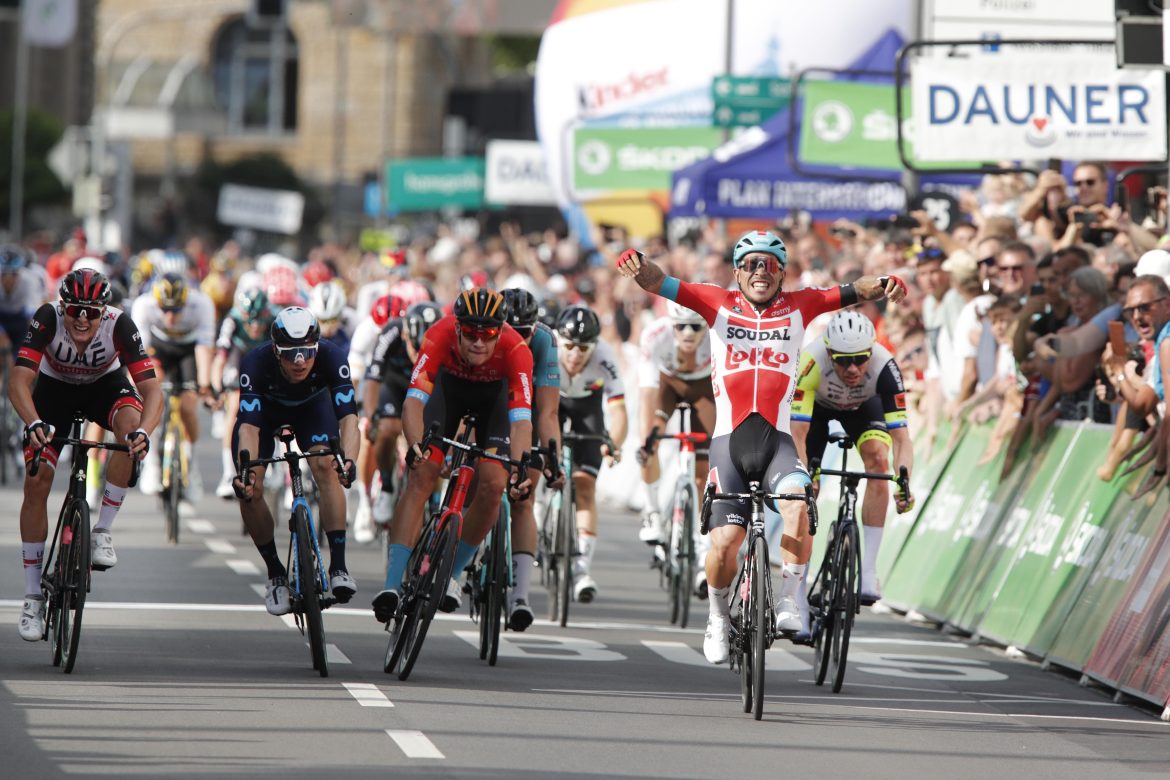 Lotto Soudal rider Caleb Ewan has won the first stage of the Deutschland Tour in Meiningen. At the end of an undulating stage, Ewan was the fastest of the bunch. Lotto Soudal guided its sprinter perfectly into the final kilometre and it was the Australian who finished it off with a powerful acceleration. That way Ewan sprinted in an authoritarian manner to his first ever Deutschland Tour stage victory and his sixth win of the season.

Following yesterday’s short prologue, the first stage of the Deutschland Tour between Weimar and Meiningen was on the menu today. Despite several climbs along the way, it looked to be a typical bunch sprint day with only four riders up the road. However, several hills in the final made a selection in the bunch and a flurry of attacks followed. It was Lotto Soudal, amongst others, that did everything they could to keep the bunch together, targeting a sprint finish for its Australian leader. After Caleb Ewan was brought up to a perfect position by his teammates, the Pocket Rocket finished the job in an impressive manner. With a powerful acceleration, Ewan won the bunch sprint ahead of the Italian Milan and the German Kanter.

“With several climbs along the way, this was by no means an easy stage but the team protected me perfectly and brought me into an ideal position towards the line”, reacts a satisfied Caleb Ewan. “I am really happy to finish it off here after a long period without victories. This stage win tastes really sweet following some pretty average months. I kept believing in myself and also my team always supported me. So I am happy to be back to winning ways and give the team this Deutschland Tour stage victory.”

“I knew I was in a good shape but due to a crash in Hamburg I couldn’t really show it so far. With several climbs, today was kind of a selective stage but I found my climbing legs again and could hang on without any problems. The undulating terrain made it a chaotic final but my teammates just did it perfectly. They kept the bunch together and made sure it would be a sprint in the end. Often, these downhill finishes are really hard to time but the guys dropped me off in a perfect position and I could start my sprint when I wanted to. It still became a little tricky when I almost got boxed in but I could find some space to pass and could power on all the way to the line. I am really pleased with this win”, concludes Caleb Ewan.