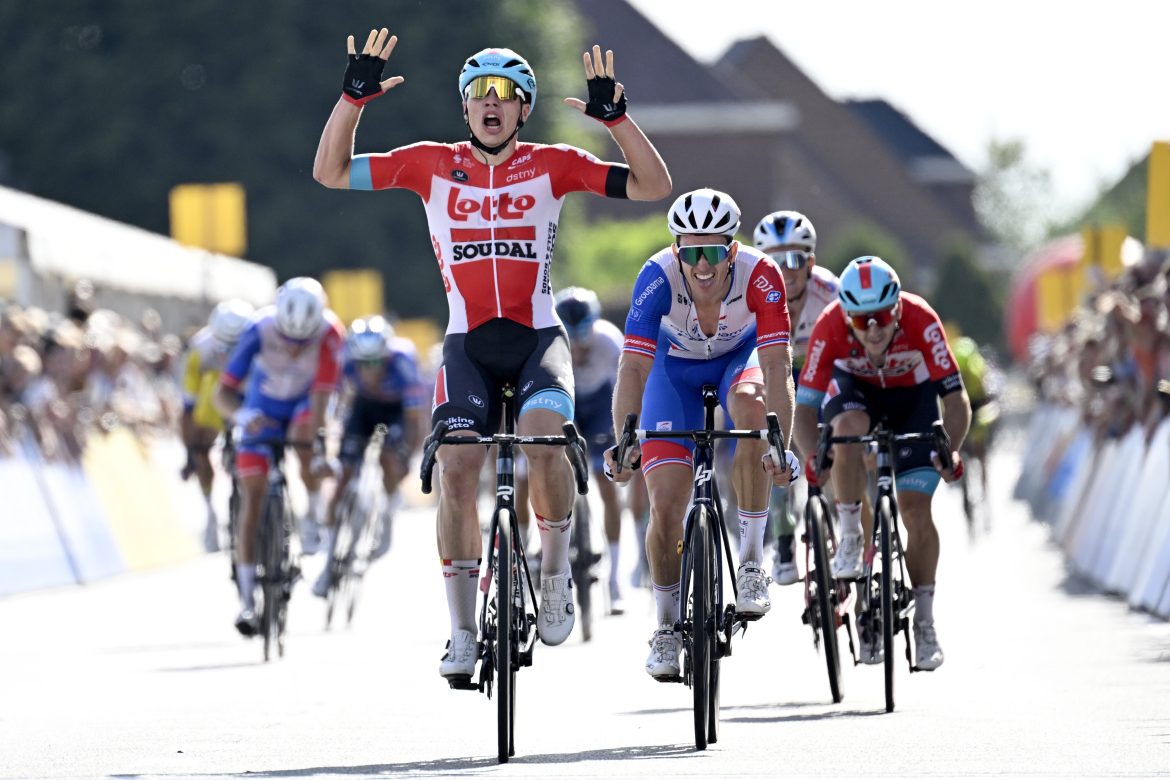 Two days after winning Schaal Sels, Lotto Soudal rider Arnaud De Lie has again shown his fast legs, this time in Zottegem. The 20-year-old Belgian sprinted to an impressive victory at the Egmont Cycling Race, which was decided in a bunch sprint after an exciting race on cobbles and short climbs. After an excellent lead-out by Jasper De Buyst, De Lie beat Frenchman Arnaud Démare to the line, taking his ninth victory of the season. Teammate Jasper De Buyst made the Lotto Soudal party complete and finished third.

“In the final local lap, I really was on my limit but when I saw the finish line in the last 200 meters, I gave it my all and that eventually was enough for my ninth win of the season. We wanted to make it a tough race with the team, that is why Florian and Victor attacked, amongst others. For us, it didn’t need to end in a bunch sprint at all cost, but eventually the race situation made it so that it was up to me to finish it off. A first and third place is a nice prove that our tactic worked today”, says Arnaud De Lie.

The course of the Egmont Cycling Race, a 1.1 UCI race, made it with several cobbles and short climbs possible to have an attractive race, and so it happened.

“In the final lap, there were lots of attacks which didn’t make it easier. Also the finish was slightly uphill but Jasper did the perfect job in guiding me into the final 200 meters. I had to dig deep to get this victory but I am really happy to finish it off.”

With his second win in three days, Arnaud De Lie starts the final part of his season really successful. “I just try to win every race where I start: for myself and for the team. At my own request, I won’t go to the U23 World Championships in Australia. With nine pro victories, I don’t have my place in that category anymore. I prefer racing in Belgium and France, where my parents and fans can come and cheer me on.”

Jasper De Buyst rode an almost home race at the Egmont Cycling Race – which he won in 2017 – and finished third after an impressive lead-out.

“With a first and third spot, it’s a perfect day for Lotto Soudal. We had a clear plan to make the race hard and protect Arnaud towards a possible final sprint. We executed that plan to perfection end didn’t need to carry the weight of the race. Just before the final cobbled section, a small group rode away but with a tough final kilometre, there never was any panic. We remained calm and finished it off in a beautiful way. My recent places of honour in Circuit Franco-Belge, Tour of Leuven and today make me happy of course. Especially this podium place in my own region gives me a good feeling after a lot of bad luck the past few months”, concludes Jasper De Buyst.