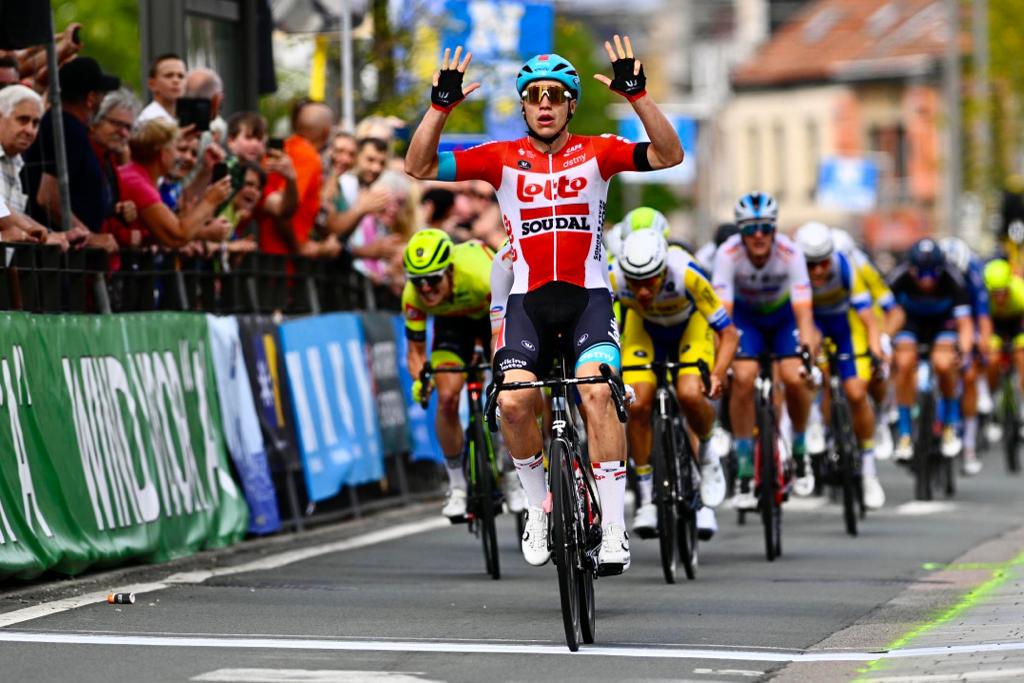 With a mighty move, Arnaud De Lie has won the bunch sprint in the Schaal Sels. He finished of the perfect job of his teammates, who worked whole day to get the 20-year-old sprinter in the best position for the sprint. “In the end, I only had to sprint for the final 150 meters.”

Lotto Soudal had traveled to Merksem with a clear objective in mind: winning the race with Arnaud De Lie. Soon a break of three riders got away, but the riders of the Belgian WorldTour team took the responsibility to make sure their lead never rose above one minute.

As planned, The trio was caught in the final. First Victor Campenaerts made a big effort, after which also Roger Kluge, Rüdiger Selig and Michael Schwarzmann rolled out the red carpet for Arnaud De Lie.

“The team has worked for me the whole day”, said Arnaud De Lie after the race. “A mass sprint or a sprint with a smaller group: to us it did not really matter, as long as I got the chance to sprint for the win. We kept the breakaway on a short leash. Then Victor Campenaerts did an enormous turn of 3 kilometers. And after that our German sprint train took the lead. In the end, I only had to sprint for the final 150 meters.”

For Arnaud De Lie this was the 8th victory of the season. “Before this season started, I could have never dreamed of this. Both for me as for the team this has been a very good season.” Next week the sprinter will take the start of the Egmont Cycling Race and the Bretagne Classic. “I can go for a good result there too. For me, the season does not need to end any time soon.”