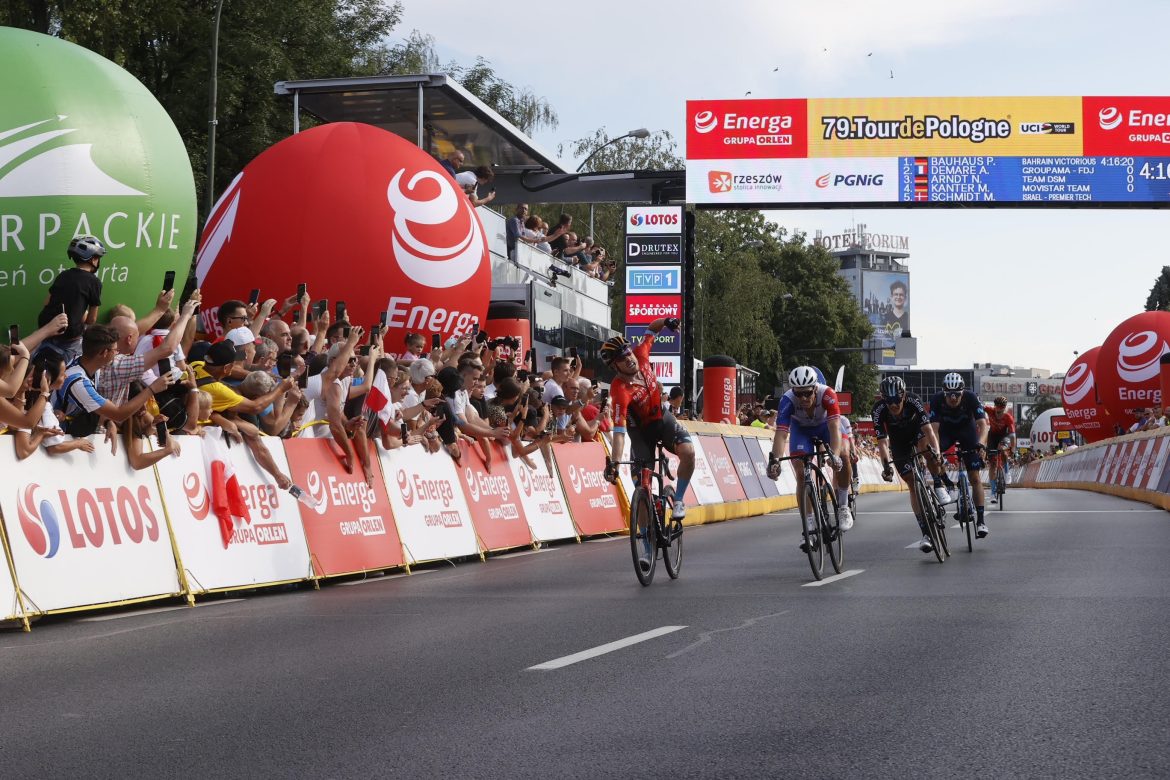 The fifth stage of the Tour de Pologne ended with an eventful finale and a mighty Phil Bauhaus (Bahrain Victorious) dominating at the end of the 178.1 km stage rode at an average speed of 41.691 km/h – from Łańcut to Rzeszów – ahead of Arnaud Demare (Groupama – FDJ) and Niklas Arndt (Team DSM).

The impeccable lead out of Jonathan Milan, who finished on the podium at the end of the second and fourth stages, allowed the German to finish the job done by Bahrain Victorious and relive the emotions experienced in the previous edition of the Tour de Pologne, when he won the first stage and took the leader jersey in Chełm.

A crash less than a kilometre from the finish inevitably disrupted the plans of several teams. It was a nervous finale in which the peloton had to work tirelessly to catch the two men left in an eight-man breakaway which had formed after numerous attacks and counter-attacks with Yevgeniy Fedorov /AST), Shane Archibold (BOH), Boy van Poppel (IWG), Mads Wurtz Schmidt (IPT), Mateusz Grabis (POL), Jakub Murias (POL), Sean Quinn (EFE) and Michal Schlegel (CJR).

In the last part of the race Sean Quinn (EFE) and Mads Wurtz Schmidt (IPT) distanced their breakaway companions, creating a gap that forced the peloton to increase the pace until less than 3km from the finish, where the teams prepared for the final sprint.

“Unfortunately there was a crash in the last kilometre and many guys fell. I feel sorry for them and hope they are all OK,” says Phil Bauhaus after the podium’s ceremony. “This time I was lucky and was one of the last riders who avoided the crash. Then I had Jonathan with me who showed in the last few days that he is in great shape. He did a great job and led me to the last few metres in the best possible position to sprint against Arnaud Demare. I am happy with my success. I finished second in the first stage in which Jumbo Visma did a great job, today it was our turn. A bunch sprint is not just about having the best legs but it is also about timing, positioning and tactics. Today we didn’t miss anything, we executed the sprint perfectly. Tomorrow we hope to do a good ITT with our GC guys and fight for the yellow jersey. The last day it’ll be another sprint bunch, my legs have been much better in the last few days, so I hope to do a good result in Krakow.”

“I recovered well after yesterday’s crash thanks to the support of the team that was there for me. I felt good today. Sometimes the day after a crash you feel sick and your legs don’t turn. But that didn’t happen today and I’m happy. I am already happy to have won a stage, I feel in good shape and tomorrow I hope to do a good performance in the ITT which is the most important part of the race for me. I am not a specialist but I will go full gas and try to give it my all until the finish,” confirmed the 25-year-old Sergio Higuita.

Tomorrow the much-anticipated time trial will start in Szaflary and finish in Wierch Rusiński and could decide the winner of the 2022 edition of the Polish stage race.