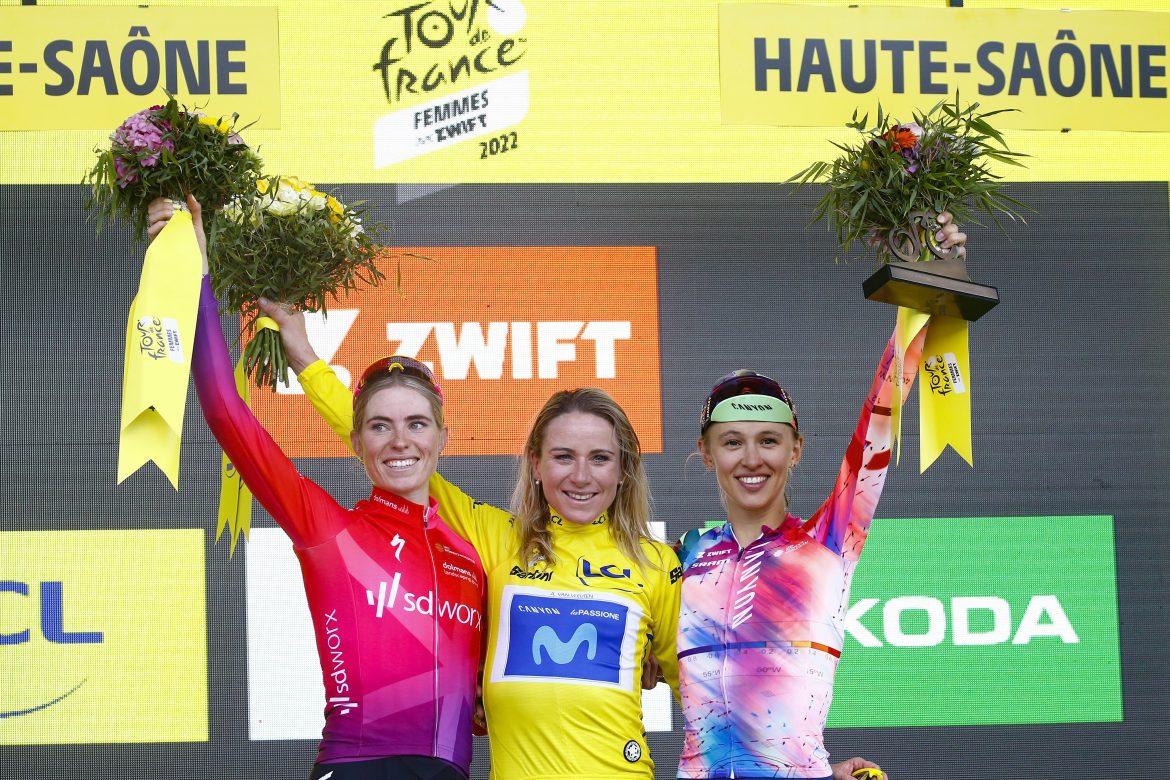 Telefónica-backed squad -17 Grand Tours to its palmarès- becomes first ever organisation to win six main men’s / women’s stageraces thanks to outstanding performance from ‘Miek’, who destroys her opposition with 80km attack on Saturday before securing yellow on Sunday with another dominating display.

A dream come true thanks to hard work, ambition and confidence in each other across the whole group. The Movistar Team celebrated on Sunday one of the biggest victories in its long history as they conquered the first edition, in its current format, of the Tour de France Femmes with GC honours for Annemiek van Vleuten.

The victory was all but sealed with Saturday’s legendary exhibition, attacking with more than 80km from the finish at the first of three big cols on stage seven -the Petit Ballon (Cat-1)- and covering the final sixty kilometers solo in the lead to build incredible gaps (more than 3′ over her nearest pursuer). At Sunday’s showdown, despite a couple of mechanic-related setbacks, she always kept composure and the great job from Sierra, Biannic, Gutiérrez (supporting her after difficulty) and Paula Patiño (shining into the breakaway, then a final leadout on the last climb) saw her rising to glory atop La Super Planche des Belles Filles.

A victory, the one from the Blue outfit led by Van Vleuten and managed by Sebastián Unzué and Jorge Sanz, achieved from the deepest suffering for Annemiek, who got sick over the first days of racing with stomach problems and was still able, with help from the team staff and her unmatched commitment, to turn the tables on before the Vosges. At that success, the contribution from Norsgaard -before her crash + DNF-, Patiño, Sierra, Gutiérrez and Biannic was fundamental.

Van Vleuten’s success -95 pro victories- takes the Abarca Sports organisation to a fear no one can brag about in cycling: they’ve won all six main men’s and women’s stageraces, with Giro – Tour – Vuelta plus the equivalent events, or those organised by the same entities, in the UCI Women’s WorldTour (Giro Donne, La Vuelta Challenge and, from Sunday, the Tour de France Femmes). A total 17 Grand Tours -plus the 2021 Ceratizit Challenge- for an organisarion which, despite being already 43 years old, continues to reach new heights thanks to a reference in results and values like ‘Miek’.