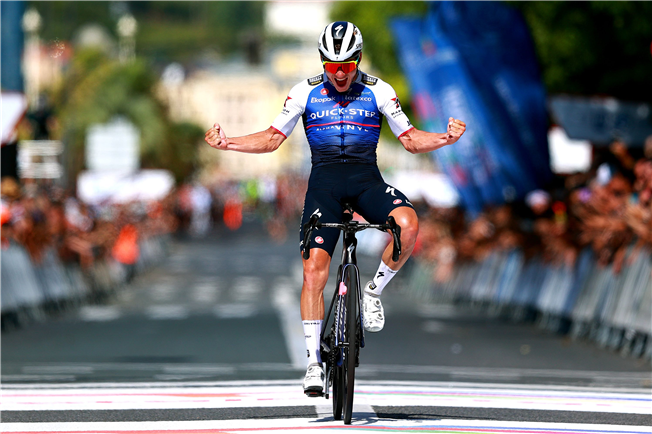 Remco Evenepoel obliterated the field in a manner similar to the one of this spring, when he took a spectacular solo victory in Liège–Bastogne–Liège, this time powering to a staggering 33rd win in the pro ranks at a Clasica San Sebastian edition that will go down in history.

The Belgian made his move on the explosive slope of Erlaitz, after the ferocious pace set by his teammates on Jaizkibel softened the bunch and distanced many of the pre-race favourites. Unfettered by the double-digit gradients, Evenepoel rode everyone off his wheel and turned the last part of the race into a 45km individual time trial. At the top of the climb, the gap to the closest chaser sat at 20 seconds, but with every kilometer it continued to grow, and by the time he arrived in San Sebastian for the short finishing loop he had more than a minute on the five riders who were trying to claw back seconds.

Murgil Tontorra, the 2.1km hill where three years ago, in his neo-pro season, he made the race-winning move, was ridden flat out by Remco through a sea of Basque fans who made for an electric atmosphere as our rider widened his advantage considerably. A feverish crowd gave the 22-year-old a raucous cheer as he arrived on the iconic Boulevard, close to the scenic La Concha beach, where he celebrated his second victory in Clasica San Sebastian by a margin of 1:58, the largest in a World Tour one-day race since 2010.

“I am very happy with this win! I came at the start fresh and motivated after a solid altitude training camp in Livigno and I am delighted with the way everything worked out. Liège–Bastogne–Liège and Clasica San Sebastian are my favourite one-day races out there, and to win them both in the same season is amazing”, said the first rider in eleven years to achieve this feat.

“The guys did an incredible job from the beginning of the day and I am grateful to them, it was thanks to their hard work that I could arrive on the Erlaitz with a lot of energy. All I had to do there was to go all-out, and that’s what I did. The gap was good, and I maintained the tempo after getting clear, although it wasn’t easy with the headwind. Then I rode full gas on Murgil Tontorra, before taking it a bit slow on the descent, knowing the two-minute advantage was enough. It was a perfect race for us and I am happy with my second txapela. I love racing here, the fans are fantastic and I can’t wait to return to the Basque Country when the Vuelta – where I’ll go with a good feeling, relaxed and confident after this win – visits it in a couple of weeks.”