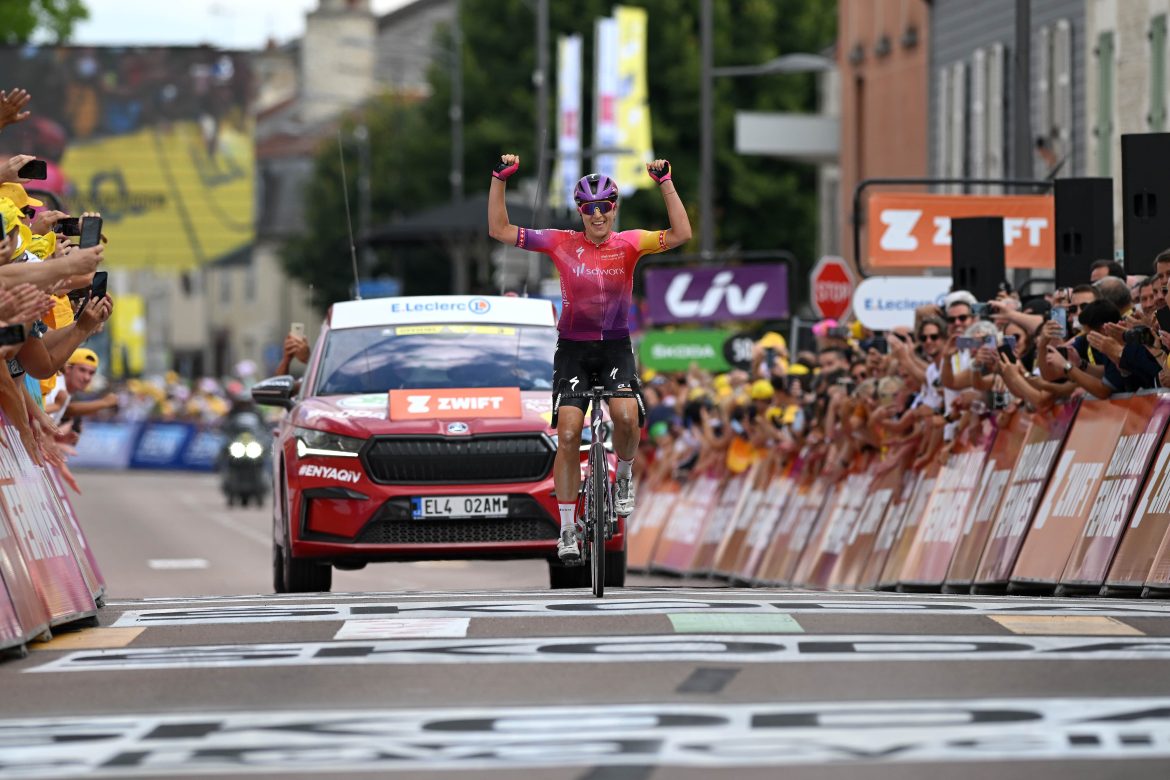 With an impressive solo of no less than 23 kilometres, Marlen Reusser rounded off a strong performance by Team SD Worx in the gravel stage of the Tour de France Femmes avec Zwift. The team dictated the pace on all the gravel roads and the Swiss team time trial specialist attacked confidently in the finale. After she had built up a gap, the competition did not get any closer. Reusser scored an impressive first stage win for Team SD Worx in the Tour. “The tactical plan worked perfectly. I don’t realise yet that I am a stage winner in the Tour de France,” Reusser said after the podium ceremony.

The fourth Tour stage with four gravel strips was marked in red in the Team SD Worx race book. It had a clear plan, in which the team would take the initiative in the finale to fight for the stage win. Team SD Worx helped to dictate the pace on every stretch of gravel. Then, 23 kilometres from the finish, Marlen Reusser went on the attack. “Our plan was to race aggressively and attack in turns. I was lucky to get some freedom, then I didn’t hesitate and went full speed ahead.”

Reusser began a time trial towards victory. The lead steadily increased towards the minute. “It wasn’t really a time trial because the last stretch of gravel and two steep climbs made the last few kilometres different. After I got in front, I knew I had to go full speed ahead. As long as the chasers think they can win, they keep on chasing. I also tried to make a mental game of it by playing with my speed. At four kilometres from the line, I knew they wouldn’t get me back just like that.”

The European time trial champion booked her first victory in the Tour de France in the colours of Team SD Worx. “This is unbelievable. This morning I didn’t even think I could win. This is really a team victory. We executed the plan perfectly. We tried to make it a hard race by constantly putting pressure on the opposition. We were well represented at the front and my teammates were able to block. This is somewhat surreal. I don’t think I realise it yet”, she concluded.

Team SD Worx thus achieved their first Tour de France victory in the history of the team. Reusser also won the battle for the podium. Lotte Kopecky finished sixth and so moved up to second place in the points classification. And Team SD Worx takes over the lead in the team classification.