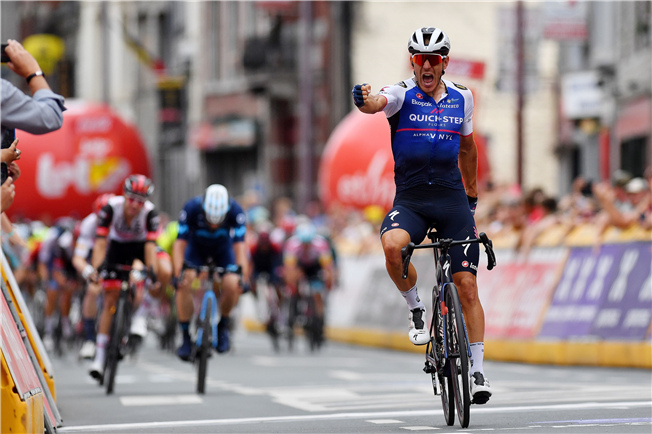 Davide Ballerini became the 12th different Quick-Step Alpha Vinyl rider to score a victory in 2022 after one of the best days of racing this season, on the penultimate stage of the Tour de Wallonie, which travelled from Durbuy to Couvin, over 200.9 kilometers peppered with five classified climbs.

The day got off to a quiet start, the peloton giving green light to six men to go in the breakaway. Davide Ballerini immediately took advantage of this opportunity, and once he made it in the front, he helped the group increase their maximum advantage to eight minutes with around 140 kilometers to go. From that moment on, the bunch moved up a gear and began chewing into their gap, which 50 kilometers from the finish sat at three minutes.

The last ascent on the course came inside ten kilometers to go, and it soon became obvious that the leaders would be caught, but as it turned out it wasn’t just a walk in the park for the field, who made contact with them only over the top of the climb, in part also to Ballerini, who showed incredible grit as he kept accelerating and pushing hard despite his chances of making it looking to go up in smoke five kilometers from the finish.

But the canny Italian wasn’t done, and on the descent, he rode clear together with three other men, and the technical roads worked into their favour, as the quartet went under the flamme rouge with five seconds in hand. As the bunch was closing in and the margin was becoming slimmer with every meter, “La Trivella di Cantù” decided to make his move at the 300 meters to go sign, launching a hugely impressive sprint and powering like a locomotive past his companions for Quick-Step Alpha Vinyl’s 38th victory of the season.

“This win means a lot for me, because cycling is my life. I’m happy to be back on the top spot of the podium after such a long time and repay the confidence of the team. This victory is also for my teammates who aren’t here anymore, I hope they will recover quickly and rejoin us soon”, Davide said after the stage which saw him become the first Italian in three years to get a victory at the Tour de Wallonie. “It wasn’t an easy day, but I kept believing all the time, even when the gap was coming down fast in the finale. Our group was small, but we gave everything and I’m happy I could finish it off for the Wolfpack.”