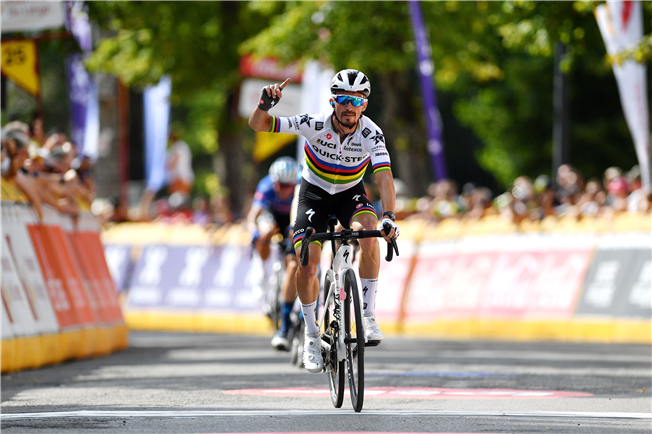 Julian Alaphilippe powered to his second victory of the season on one of his favourite playgrounds, the Mur de Huy, the mythical climb where stage 1 of the Tour de Wallonie concluded. His hat-trick of victories in Flèche Wallonne made the World Champion the outright favourite despite not having raced since the end of June, and the Frenchman didn’t disappoint on the steep slopes of the Mur de Huy.

Five men jumped early in the 174.4km stage to form a break that was controlled by Iljo Keisse, who did an excellent job in the first part of the race, keeping the gap hovering around three minutes before ramping up the speed and erasing a full minute as they entered on the first of the two local laps featuring the Mur de Huy.

Quick-Step Alpha Vinyl dictated things also there and made sure of bringing back the escapees before the second time up the famous Chemin des Chapelles. Knowing every inch of the climb like the back of his hand, Alaphilippe remained calm and focused until the last 200 meters, where he made his move, surging to a well-deserved win – his fourth in five years atop the Mur de Huy – that at the end of the day landed the race’s first yellow jersey on his shoulders.

“I’m really happy. I was very excited this morning at the thought of being back with the guys in a competition again after our training camp in Livigno, I had a lot of motivation knowing I would finally resume racing and was very confident, because I had a strong team around me, and together we prepared a solid plan for today. We controlled the race from the beginning with Iljo, then the others stepped in in the final part of the stage and they too did a great job, and that’s why I want to thank them all.”

“I’m delighted that I had the legs to finish the day in the most beautiful way possible. The Mur de Huy is always a difficult finish and it’s never easy to win here, you feel the pain with every meter. The fact that I lead the general classification is a bonus, but I just want to take it day by day and focus on every stage before thinking of the overall. I am just happy to have tasted victory again after a long time”, Julian explained after the podium ceremony.