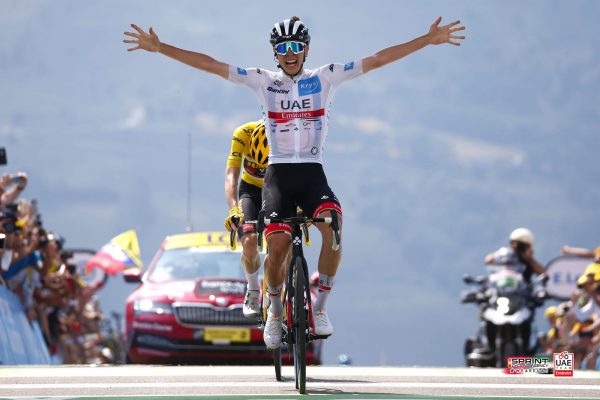 Tadej Pogačar won his third stage in this Tour de France in a thrilling finale, crossing the finish line first on Peyragudes.

The stage saw the riders face the Pyrenees again with a shark-toothed profile from Saint-Gaudens to Peyragudes over 129km.

Despite UAE Team Emirates showing up at the start with only four men after Marc Soler’s forced retirement yesterday and Rafal Majka today following a muscle injury, the UAE squad lit up the stage.

Mikkel Bjerg took up the work for the second half of the stage at the head of the group keeping a very high pace for many kilometers without giving the escape a chance to gain precious seconds.

Brandon McNulty took over on the second ascent of the day. The American set an incredible pace which he would hold for the final 20km with only Tadej Pogačar and the Yellow Jersey Vingegaard (Jumbo-Visma) able to keep up with him.

Over the crest of the penultimate climb Pogačar tried to detach Vingegaard, with McNulty coming back to dictate the pace and lead the trio up to the last 500 meters, where Pogačar pushed hard to take victory.

Third place for McNulty, awarded as the most combative rider of the day.

Pogačar: “The way the team rode today, we couldn’t help but aim for victory. Without George, Rafal, Marc and Vegard we still managed to give our best. Let’s see how it goes tomorrow, but for the moment I’m very happy with this victory. In the final I gave everything, I knew I couldn’t do anything other than win, I owed it to the team. Marc, Brandon and Mikkel did a great job and we were able to give each other strength. There is still an important stage tomorrow and I want to give my best.”

Tomorrow the last Pyrenean stage is 143.2 km from Lourdes to Hautacam with three decisive ascents in the second half of the race.