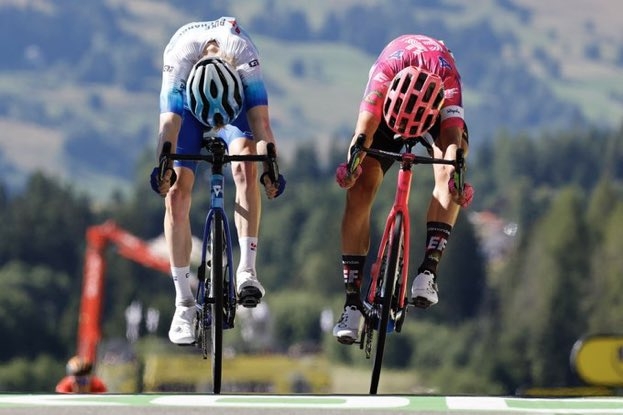 Magnus Cort has won the tenth stage of the Tour de France.

“It’s unbelievable. I can’t believe what just happened today,” he said after raising his arms on the podium.

After a furious start downhill from Morzine, the Dane joined a large breakaway over the top of the second climb, the Col de Jamblaz. The group, which included his EF Education-EasyPost teammate Alberto Bettiol, quickly built up a great lead over the chasing peloton. Once they reached the valley leading to the final climb to Mégeve, Alberto went on the offensive, launching a solo attack in the shadow of Mont Blanc. As the Italian powered into the wind and forced the others in the group to chase, Magnus stayed tucked in their wheels. All the way up the final col, he stayed calm, letting the others cover the attacks once Alberto was brought back.

“I was on the limit for so long on this climb,” Magnus said. “Luckily I had Bettiol. He was really strong and was in front which meant I could sit on and save some energy. I almost lost the group a couple of times in the last kilometers, but suddenly it was all back together and I was there.”

Magnus waited and waited and then launched his sprint at just the right moment. He timed his bike throw perfectly and won the stage.