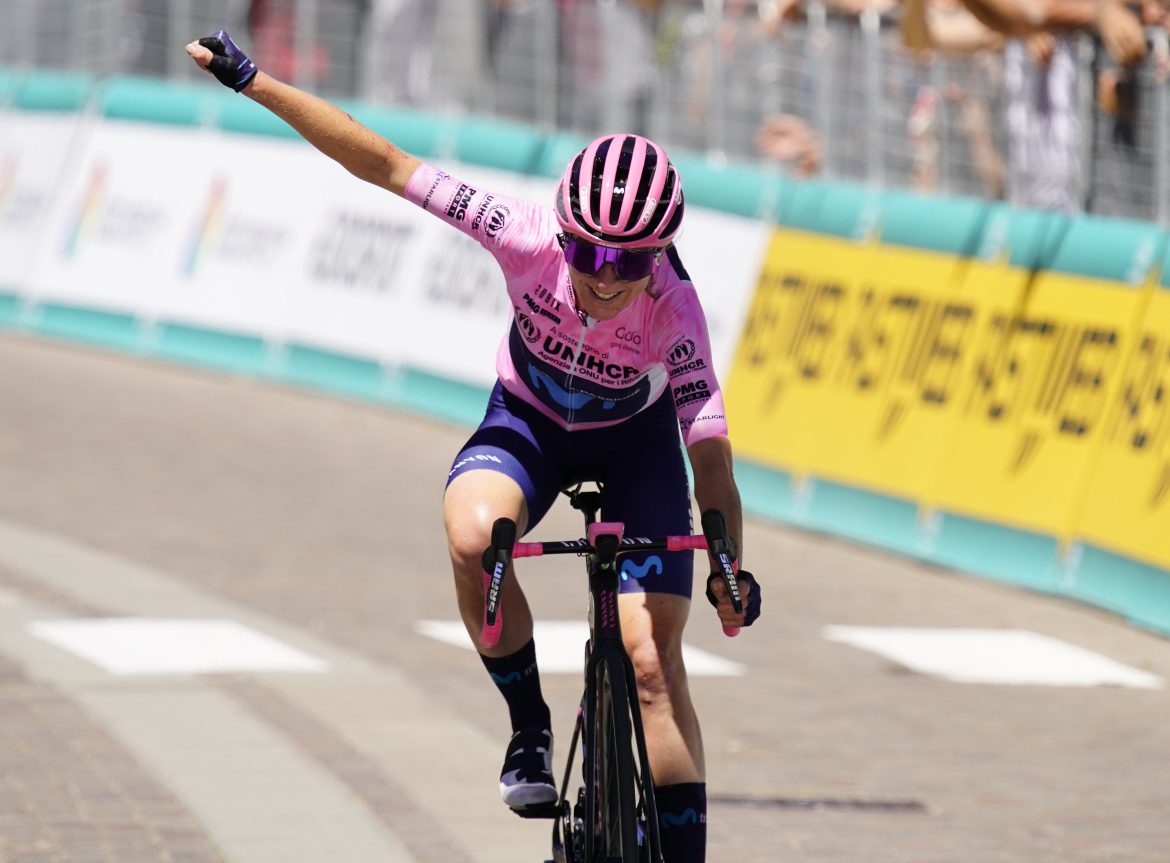 Despite a late crash on the descent of the Lago di Cei (Cat-2), the Olympic champion from the Movistar Team wins with 1′ over Cavalli (FDJ) as she increases her GC lead beyond 2′ with just two days to go.

The grit of the big champions – and some undesired drama, too! Annemiek van Vleuten (Movistar Team) greatly increased her advantage as Maglia Rosa of the 2022 Giro Donne by putting almost a minute on her nearest opposition in Aldeno, end of a beautiful stage eight in the Dolomites (104km) over the climbs of Passo Bordala (Cat-2) and Lago di Cei (Cat-2).

A brilliant approach by Jelena Erić to the latter of the climbs allowed ‘Miek’ deploying her irresistible pace early on. She had to fight against a tough contender, Marta Cavalli (FDJ), whom she kept behind at short distance before ultimately opening gaps near the top, with García (UAD) far behind. However, a crash into the downhill -with just minor bruises as a result- put some drama, and emotions, into the women’s Movistar Team’s 16th success in 2022.

It’s a 2’13” margin, with two days to go, separating the Olympic champion from a huge moment of joy she’ll still have to work hard for. Saturday will mark the last mountain trek in Italy, the Queen stage over the GPMs of Fai della Paganella (Cat-2), Duron (Cat-2) and the brutal Daone (hc) towards an uphill finish in San Lorenzo Dorsino (113km).

“This stage was really on my list. After yesterday’s stage, which was not for me, I looked at this one as an opportunity to attack hard and go for it, because you never know. It’s always nice to go for stages like this, even more so in this beautiful race and scenario.

“My team-mate Jelena Erić made an incredible 1km leadout into that final climb, and when you see someone setting things up that way for you, you feel the nerves, the anticipation of having to go. With all the all-out training I carried out, I knew that the recovery to go on these efforts was good, I feel well recovered every day. And I’m ready to go for tomorrow. I also wanted to say thanks to Aude Biannic and Emma Norsgaard for the way they took care of me on the tricky zones; they helped me stay relaxed.

“Cavalli was strong today. I was always keeping something between six and ten seconds, but I knew I had to commit and never look back. I knew those 10km ahead played to my advantage, and with 3-4 to go, I started to open that advantage.