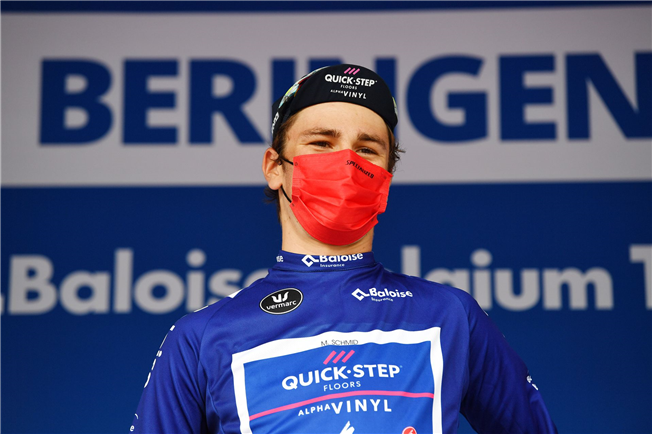 Mauro Schmid became the first Swiss rider in history to win the Belgium Tour, one of cycling’s oldest races, after successfully defending his slim margin in the general classification on the 179.9km stage 5 that travelled from Gingelom to Beringen.

Having pulled on the blue jersey at the end of Saturday’s hard stage in the Ardennes, Mauro knew the Golden Kilometer bonus sprints, placed inside the final seven kilometers, would be crucial, and guided by Michael Mørkøv he took the same number of bonifications as his closest rival in the general classification before concluding the stage in the pack and sealing the victory for less than half a second – the difference made in the race’s short individual time trial.

The team did a great job the whole day, keeping me in a good position. Michael’s experience was important, his presence in the Golden Kilometer helped me take home the overall win. At the first sprint I made a small mistake and I thought that was it, I had lost it, but I remained calm and took back those seconds at the next two sprints.”

“Winning a stage race for the first time in my career feels special. Everybody believed in me, including Fabio, who sacrificed his lead-out for this. There was some pressure on my shoulders today, but I managed it and I’m happy with this success. It’s another important step in my career, one for which I am grateful to the team”, Mauro explained after netting Quick-Step Alpha Vinyl’s tenth victory at the Belgium Tour.

The last stage of the competition came down to a mass gallop, and Fabio Jakobsen was there, grabbing the opportunity with both hands. The most successful sprinter of the year, the Dutchman kept his composure as he navigated the hectic corners in the closing kilometers and unleashed a phenomenal burst of speed in the last 150 meters, giving no chance to his opponents and nabbing his tenth win of the year.

“The general classification was more important and the team went for it today, because they had faith in me that I could do the sprint on my own. The last lap was like a criterium and I was in a good position at all times as we got closer and closer to the finish. Then, with 100-150 meters to go, I launched my sprint and I got this victory that I really wanted and which gives me a lot of confidence for the next races”, said Fabio, who signed off the Wolfpack’s 31st win since the beginning of the year, one which keeps the squad at the top of the team victory standings.