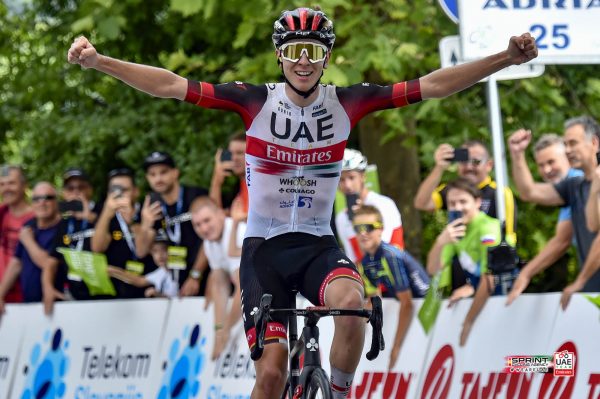 Tadej Pogačar returns to savor the taste of victory and does it on his home roads, winning the 3rd stage of the Tour of Slovenia, 144.6 km from Zalec to Celje.

As happened on Wednesday on the occasion of Rafal Majka’s success, the winner of two Tour de France titles pounced from afar, attacking from the group together with his Polish teammate 23 km from the line: the UAE Team Emirates duo stormed the 2nd category ascent of Svetina (5.2 km at 7.7% average gradient), gaining a good margin on the chasers.

After taking the descent, without risking too much, Pogačar and Majka were joined by Nicola Conci (Alpecin-Fenix) just before the last hill, the ascent towards the finish line in Celje.
The Slovenian climber immediately made a decisive move that put Conci under pressure: with victory for Pogačar with 11 ” over his teammate Majka and 14″ over Conci.

With today’s results, the Slovenian talent (8th win of the season, 27th for UAE Team Emirates) jumped to the top of the overall standings with 7 “over Majka. The Pole leads the ranking of climbers and the points ranking.

Pogačar:“As a team we have worked perfectly to keep the situation under control. On the climb, Rafal and I decided to attack together and it was enough to create a margin on the chasers.
The descent was very slippery, also due to some rain that had fallen; I knew it would be difficult to ride it hard, Conci recovered well and at that point we knew we had to move intelligently on the last hill . It went well, I’m very happy to have got the win “.