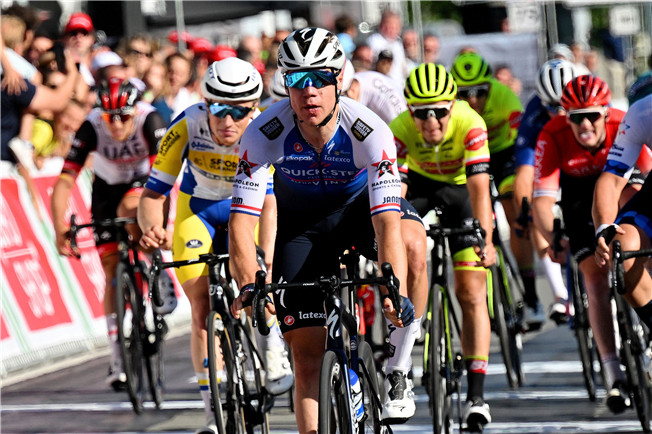 Fabio Jakobsen confirmed once again he is one of the peloton’s fastest sprinters, dashing to his ninth success of the year after a hard edition of Elfstedenronde – which started and finished in Bruges after 192.3 kilometers that contained several cobblestone sectors which spiced things up once the peloton entered the local laps.

It was on one of this tricky pavé stretches that a crash took place, splitting the bunch some 55 kilometers from the finish, and forcing the teams of the sprinters that were caught up in that pile up to launch a desperate chase which ended only on the penultimate lap, when they finally bridged across and things calmed down a bit.

Coming off the last cobbled section of the race, a rider tried to go clear, but Quick-Step Alpha Vinyl – prominent at the head of the field since the beginning of the day – shut down that move before setting up the sprint for Jakobsen. It turned out to be a hectic mass gallop, but the Dutchman remained composed and attentive, and piloted by his solid lead-out train shot from the pack at the perfect moment, sprinting past all his opponents and delivering our first victory in the Belgian one-day race.

“We started with six men today, but everyone did a great job. Iljo spent a lot of time pulling at the front, before Pieter took over. Yves kept me in the front in the final kilometers, then I lost Florian and Michael for a brief moment, but Florian could bring me to the front again, making sure I wouldn’t make any effort until with 250 meters to go. The last kilometer was chaotic, but I remained calm and could take this victory which gives me confidence, as it came against many of the peloton’s top sprinters. It’s an important result for the next races”, said Fabio after his ninth win of the season.