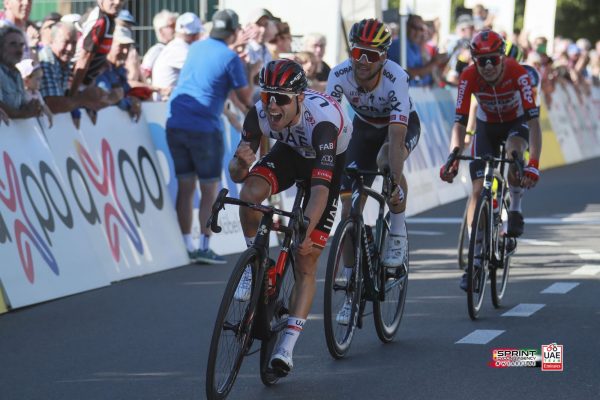 The Emirati squad had strength in numbers in the final with Diego Ulissi and Matteo Trentin covering moves before Hirschi infiltrated the winning break which slipped away at 7km to go.

The 23-year old hit out early from the four man group to open up the sprint at 250m to go to hold off Max Schachmann (Bora-Hansgrohe) and Andreas Kron (Lotto-Soudal) who finished on the podium.

Diego Ulissi and Matteo Trentin rounded out the top-10, coming home in 9th and 10th respectively.

In raising the trophy he becomes the first home winner of the race since 2013.
This result marks Hirschi’s second win of the season after storming to victory at the Per Sempre Alfredo classic in April.

Marc Hirschi: “It was a really hard race and I’m really delighted to win it. It was a hectic race and very fast all day. Race craft was important to set-up the finale and timing in the sprint in the end was crucial. With just over 200m to go I went and had a bit of a tailwind and managed to win. It felt so good also because I am racing here in Switzerland and it’s nice to be here in front of family and friends. It’s a good sign for the team ahead of the Tour du Suisse.”