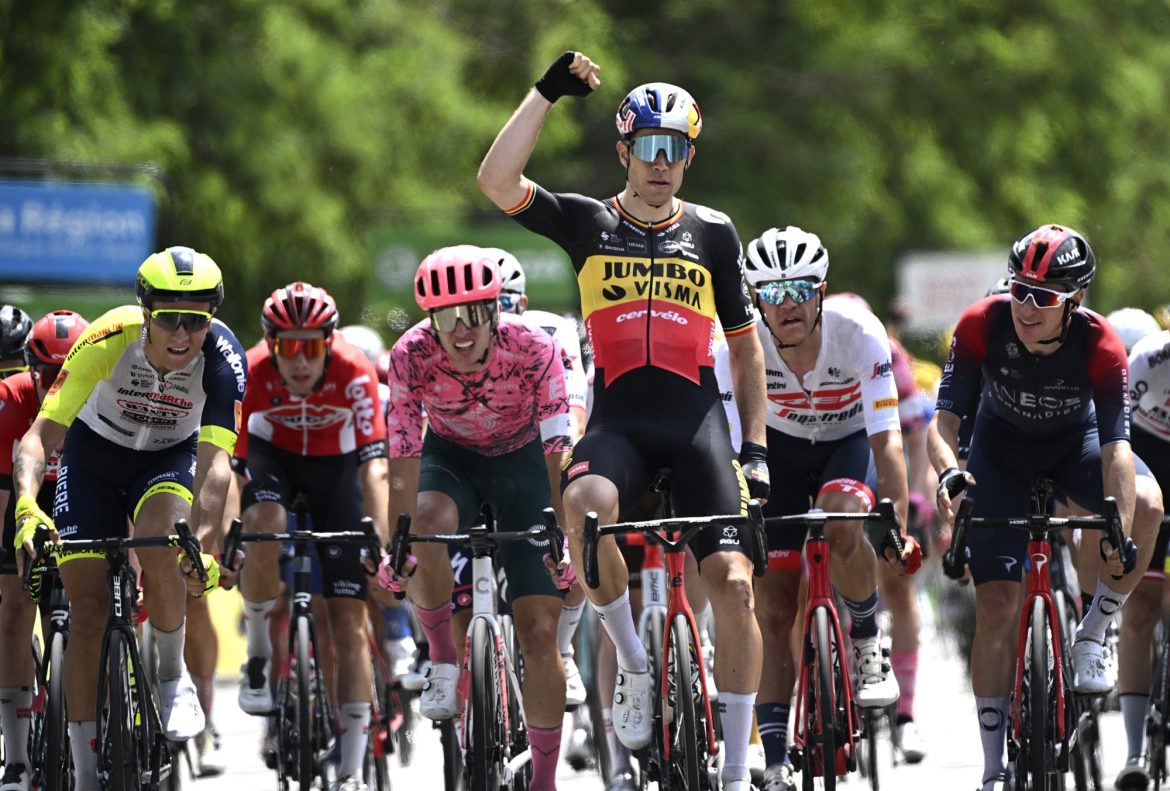 Wout van Aert has won the first stage of the Critérium du Dauphiné. In the hilly opening stage through the Ardèche, the Belgian champion crossed the line first in the bunch sprint. As a result, Van Aert is the new leader in the general classification and the points classification.

On the day’s final climb, the peloton increased its pace. Thanks to Team Jumbo-Visma and other teams, some of the fastest riders could not keep up and had to let the peloton go. A sprint with a depleted peloton seemed inevitable.

Frenchman Rémi Cavagna tried to escape just before the final kilometre, but a strong effort from Christophe Laporte prevented Cavagna from doing so. Subsequently, Van Aert got in an ideal position. He started his sprint and a little later he won for the fourth time this year. Van Aert’s win meant the sixteenth season victory for Team Jumbo-Visma, which had all its riders finish in the first group.

“I was well positioned”, Van Aert said. “After Christophe went to the limit to catch Cavagna, I chose the wheel of the Ineos guys. I was riding in an ideal position to deliver a good sprint. It wasn’t easy to stay ahead of Ethan Hayter. I am thrilled with this victory. The team kept me in front all day. I felt good on the climbs, also because of the excellent teamwork. In the spring, I was not always satisfied with my sprint. I have put a lot of work into it in recent weeks. It gives a good feeling when it pays off immediately.”

Van Aert has no intention of handing over the yellow leader’s jersey easily. “Hopefully, I can keep the leader’s jersey for a few days and then hand it over to Primoz. The upcoming stages suit me, so we’ll see how far I can get. It’s not a given, because the course is difficult every day. Today confirmed that we are on the right track concerning our Tour preparation. Hopefully we can continue that line in the coming days.”