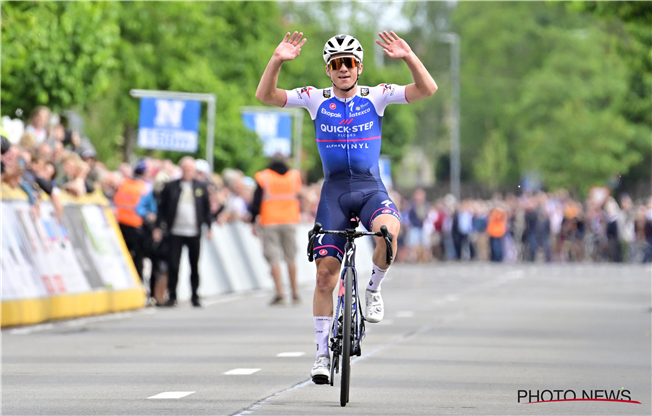 Remco Evenepoel took his fifth victory in the space of just one week, just two days after completing the Tour of Norway, where he prevailed in the general classification after a trio of stage victories. Back in his home country for Quick-Step Alpha Vinyl’s last outing of the month, the 22-year-old attacked from the off at the flat Gullegem Koerse together with Stijn Steels, before being joined by two other riders on the second of the day’s 18 laps.

Some 20-odd kilometers later, the group swelled to 17 men, as attacks kept coming from the peloton, and the newly-formed move increased its lead to three minutes halfway through the race. At that point, it became pretty much clear they wouldn’t be brought back anymore, especially as the peloton began fragmenting in the last five laps.

Then, just ahead of the closing ten kilometers of Tuesday’s action-packed kermesse, Remco launched one of his trademark attacks and used his superior time trial skills to instantly open a 15-second gap which he carried all the way to the finish, where he had plenty of time to celebrate the team’s eighth victory in Gullegem Koerse.

“We went into the break quite early. I can’t say this was the plan, but it turned out well. The race was hard with all those tricky corners, we rode full gas all the time, and it was good when the others joined us, because it meant I could conserve some energy. With a couple of laps to go, a cat-and-mouse game began, as some riders attacked, while others stayed at the back.”

“Then the speed went up again, and a group of seven I was part of rode clear with four laps remaining. I noticed everybody was on their limit, so before the last lap I decided to have a go and launch an all-out attack which I could finish off. I am happy with my fifth win in seven days, it’s been a great week, and I now look forward to recovering a bit before my next race”, a smiling Remco said.