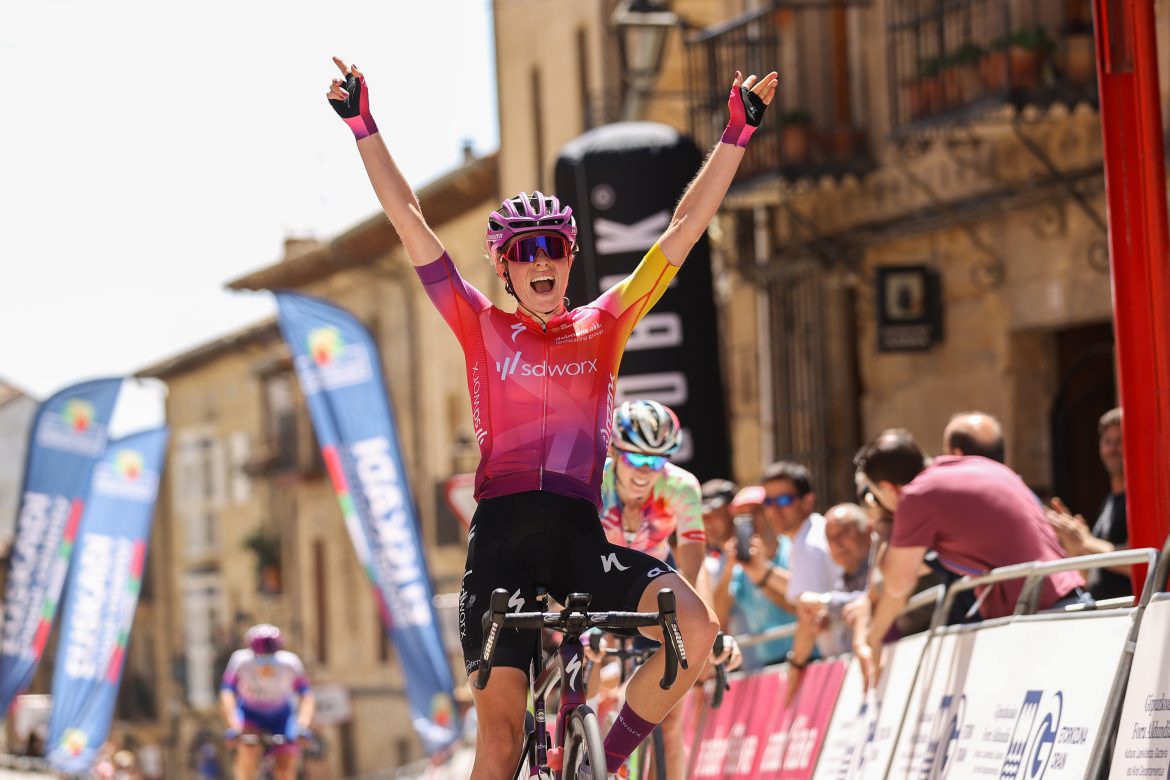 Itzulia Women heralded the start of the second part of the season. The multi-day stage race began with a difficult opening stage, which was convincingly won by Demi Vollering. The Dutch rider was always to be seen at the front in the decisive moments of the race. She finished it off in an uphill sprint after a breakaway with Pauliena Rooijakkers and Kristen Faulkner. “This finish suited me, this gives a very good feeling,” Vollering said in an initial reaction.

The opening stage of Itzulia Basque Country promised to be tricky with the necessary altitude metres on Mirador de Rivas and Herrera half way through the race. No wonder the riders took a wait-and-see approach at first. The long breakaway got caught on these climbs and Ashleigh Moolman-Pasio and Demi Vollering decided to get ahead in the descent of the Herrera, together with Lucinda Brand and Elise Chabbey.

“Our tactic was to check what the rest of the pack was up to in the early stages. We are only four riders from Team SD Worx, so we couldn’t attack all the time and had to choose our moments. We tried to get away, but there was a lot of headwind,” Demi Vollering explains. “From the Herrera the race broke completely open and there were many attack attempts. In the descent, Ashleigh Moolman-Pasio and I managed to create a gap together with two other riders, but unfortunately our breakaway didn’t make it to the final despite a half-minute lead.”

At 20 kilometres from the end everything came together again and Kristen Faulkner managed to get away. Only Demi Vollering and Pauliena Rooijakkers were able to catch up, after which they worked well together and the leading group built a 41-second lead on the peloton. “The cooperation went smoothly. With Pauliena it is nice to set up a breakaway, she always takes her part in riding as well. I expected her to try to make it harder with a long sprint, but I just kept my cool. Luckily I was able to answer her acceleration right away.”

Vollering then went full speed ahead on the steep section up to 20%. “The finish line suited me perfectly. This is a cool race, it’s really tough, but that’s what I like. That I am now even more of a favourite for the overall victory? That doesn’t matter to me. I am looking forward to wearing the leader’s jersey tomorrow. We are here with a small team, but it is a very strong team with strong climbers. So I’m looking forward to the rest,” concludes Vollering, who hit the mark for her second victory this season after her win in the Brabantse Pijl and podium finishes in Omloop Het Nieuwsblad, Amstel Gold Race, Flèche Wallonne and Liège-Bastogne-Liège.