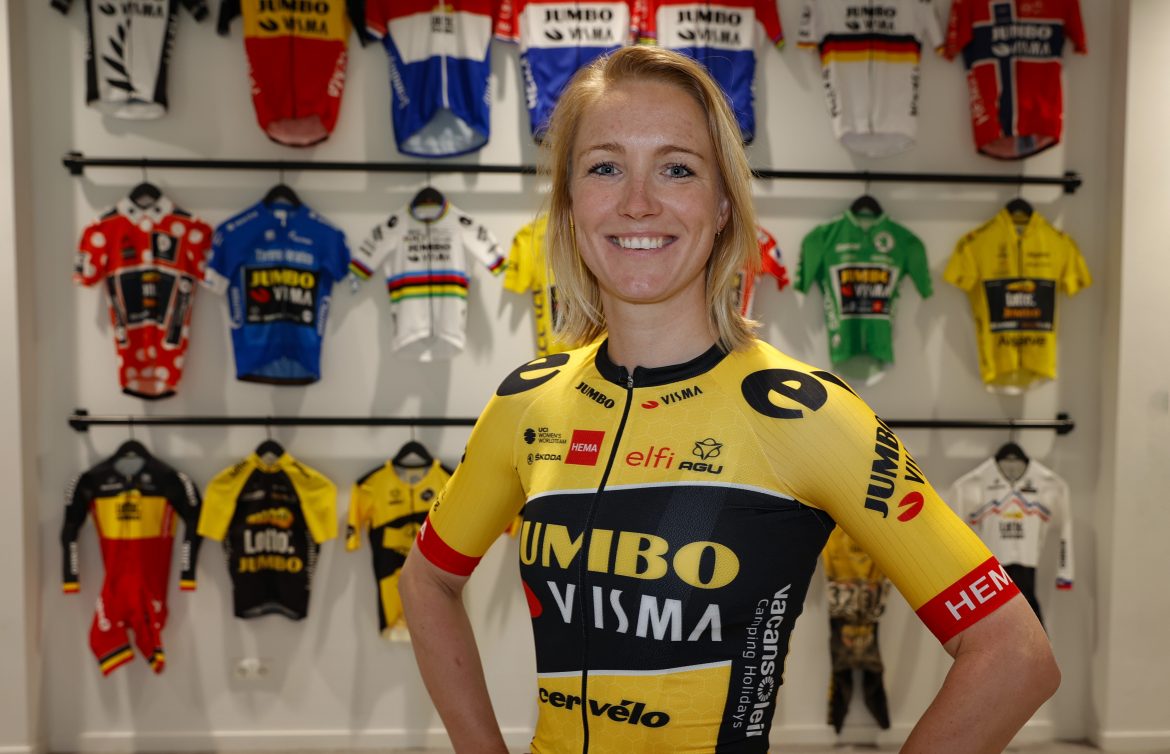 As of 1 June 2022, the women’s team of Team Jumbo-Visma will be reinforced by Carlijn Achtereekte (32). An exceptional transfer because Achtereekte – who won gold in the 3000 metres during the 2018 Olympic Games – has been skating for Team Jumbo-Visma for the past five years.

Achtereekte has been under contract with Jac Orie’s skating team since 2017 and has achieved excellent results. In 2018 she became Olympic champion in the 3000 metres; in 2020, she was second during the World Championships (3000 metres) and in 2021, the long track skater finished third in the 5000 metres during the World Cup.

Last April, her Team Jumbo-Visma skating team contract expired. It forced Achtereekte to think about the future. Her conclusion: ‘I’m done with skating, but I am not yet done with top sport’. Achtereekte contacted sporting director Merijn Zeeman and presented her findings to him. The ball started to roll, and it moved quickly.

“I have always had a passion for cycling. I sometimes thought: why don’t I do that? But skating went well and that’s what I focused on”, Achtereekte says. “Now I get the chance to develop into a professional cyclist and I am very grateful for that. I am eager and ambitious.”

Esra Tromp, manager of Team Jumbo Visma Women, is happy with Overeekte’s arrival. “Within Team Jumbo-Visma, we always look at how we can make each other better. Carlijn misses the routine of cycling in a peloton, and there is work to be done on a technical and tactical level, but she also brings a lot to our team. A top sports mentality, for example, and experience with performing at the highest level. Carlijn dares to make choices; she sets priorities and knows what to do to achieve her goals. She breathes top sport. Her knowledge and attitude are valuable to our team.”

Robbert de Groot (head of development) and performance coach Marieke van Wanroij have been training Achtereekte since April
“In the coming weeks we will focus on increasing endurance and technique training”, Tromp says. “Carlijn’s fitness is fine; her values have shown that. The biggest challenge lies in playing the game on the bike. Learning to position, being able to assess opportunities, riding assertively. We will pay a lot of attention to that in the coming period.”

Achtereekte: “It will be a matter of trial and error. As a skater, you ride in your own lane and you aren’t bothered by anyone. Now I have to learn to deal with the peloton’s nervousness and fight for my position. That will take some getting used to, but I assume that I will learn those skills quickly. I’m going to copy the art of my teammates and hope that I can play a role in the service of the team.”

Team Jumbo-Visma’s women’s team will go to training camp from 11 May. Achtereekte will also be present. Subsequently, she will compete in several smaller races and criteria. Based on her development in the training sessions and the race results, the team determines when Achtereekte will ride her first major race. Though, it has already been decided that Achtereekte will start in the Dutch National Championships on 25 June.

Achtereekte is not the first rider within Team Jumbo-Visma to exchange one top sport career for another. Primoz Rogliz (former ski jumper) and Amber Kraak (former rower) preceded her. Achtereekte is the first athlete to make a switch within the same team.