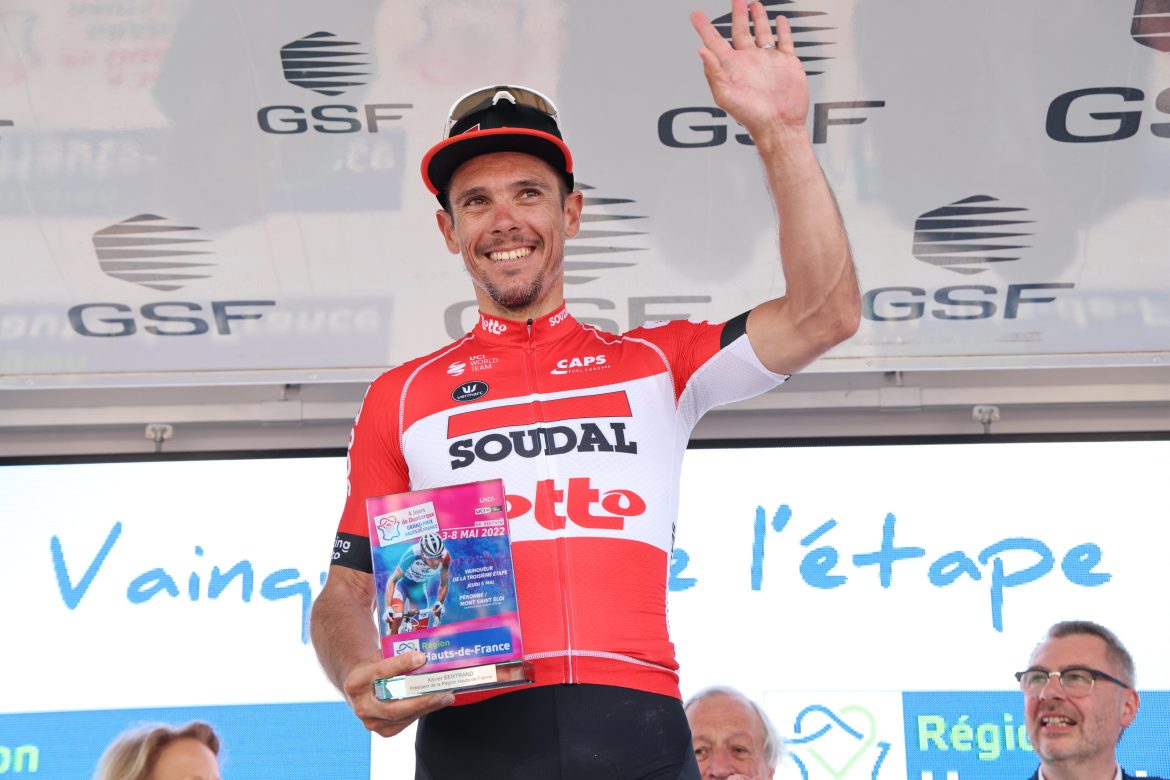 After winning the third stage, Philippe Gilbert now also took the win in the general classification of the 4 Jours de Dunkerque. In the final stage from Ardres to Dunkerque his small advantage of 4 seconds was enough to take home the pink leader’s jersey.

It was clear from the beginning that the 4 Jours de Dunkerque would end up in a fight for seconds. Philippe Gilbert took the leader’s jersey on Saturday with a lead of only 4 seconds on Oliver Naesen and 5 on Jake Stewart. Benjamin Thomas and Baptiste were also close with a gap of just 10 seconds.

The Lotto Soudal-team had to be on its guard during the final stage to make sure Gilbert was able to take home the pink jersey. Soon, a group of 7 riders got away, taking all the bonification sprints on the road. They never got more than 3 minutes on a peloton that was controlled by the sprinters’ teams and Lotto Soudal.

In the final they were caught one by one, after which Gerben Thijssen took home the bunch sprint victory. Gilbert finished on a safe 15th spot, while his closest competitors were not able to take any extra seconds. This way Gilbert secured his overall win.

“After the disappointment of missing out on yesterday’s stage (when Gilbert finished 4th but did take the leader’s jersey), I am very happy with this overall win”, said the 39-year-old Lotto Soudal-rider. “I had some stress in the beginning, because there was a tricky local circuit in the final, with a lot of turns and a constant battle for position.”

After his stagewin earlier, this overall win was Gilbert’s second win since his return to Lotto Soudal. “It makes me very happy. I have had two difficult years with a lot of troubles and tough times”, said an emotional Gilbert. “But I want to end my career on the highest level. I have never forgotten what you have to do to get there. The Classics were difficult for me, because I was never able to do my training as planned, due to illness. Here, in better weather and in a shorter race, I was able to get the win. Thanks also to the great team over here.”

According to the former world champion, we can expect more of him this season. “First I am getting married, later this month. But for the races afterwards I am very ambitious. I want to win some more.”