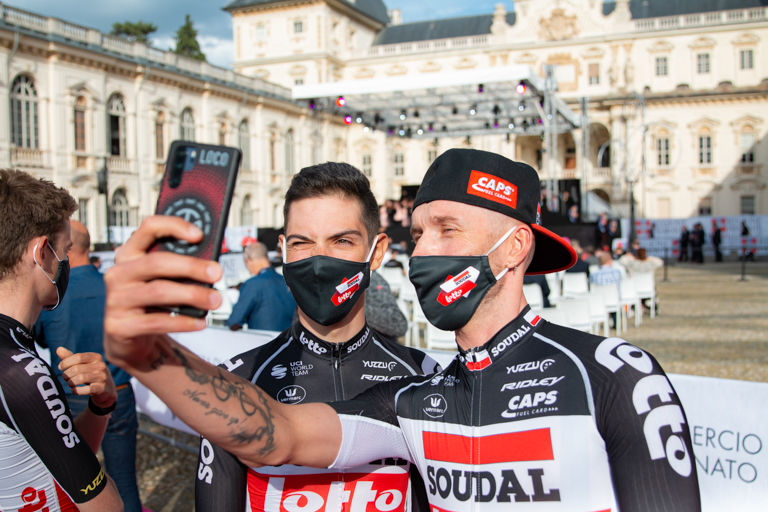 For the 105th edition, the Giro d’Italia will follow the Corsa Rosa across several digital platforms, alongside the website and the official Giro d’Italia app, thanks to a live feed in 4 languages ​​(Italian, English, Spanish and French), featuring stories, statistics and more. The web section, in partnership with 3BMeteo, will also provide live weather reports (including wind and temperature) along the most interesting points of the race.

In addition to the podcast in Italian, this year’s Giro d’Italia will also have podcasts in Spanish, thanks to a partnership with El Maillot.

THE MOST AGGRESSIVE RIDER OF EACH STAGE WILL BE VOTED ON TWITTER
This year the most aggressive rider from each stage of the Giro d’Italia will be decided by fans on Twitter. Voting will take place on the official Giro d’Italia Twitter account overnight, from 7.00pm to 7.00am the next morning. A maximum choice of 4 names will be indicated by 6.30pm after each stage. The most voted name will wear the red dorsal.

THE GIRO AND TIKTOK
Giro d’Italia is ready to involve the TikTok community through comments, follows and the participation in creativity that distinguishes the 105th edition of the Giro. From Friday 6 May the TikTok community will be able to follow the Corsa Rosa with the hashtag #giroditalia for the duration of all 21 stages. Creators, together with the @giroditalia account, will tell stories about the many unmissable realities encountered traveling throughout the regions. They will explore the most unexpected stories, traditions and local folklore, all using the characteristic communicative language of the platform, from sounds, trends and a lot of creativity.

GRANDE ARRIVO: FINAL ROUND OF THE GIRO D’ITALIA VIRTUAL HOSTED BY BKOOL
The Giro d’Italia Virtual, hosted by BKOOL reaches its final phase in conjunction with the grand tour, and includes 8 stages of this year’s route, reconstructed in 3D. From 6 May to 10 July cyclists from anywhere in the world can participate in the last stages of the official virtual edition of the Giro d’Italia, organized by BKOOL and RCS Sport.
Participants can ride alongside the pro’s and enjoy the experience through a smart trainer or smart bike, and a computer or tablet, with the free BKOOL app. Confirmed participants already include Chris Froome and the EOLO Kometa team.
Registrations are open on the website: www.girovirtual.com.The stages of the third phase of the Giro d’Italia Virtual hosted by BKOOL:
Torino TISSOT: 8.3km / 14m +, Monte Zoncolan: 8.5km / 806m +, Alpe Motta: 8.7km / 630m +, Ravenna-Verona: 30km / 96m +, Passo Fedaia: 11.1km / 819m +, Perugia-Montalcino: 25km / 540m +, Monte Rest: 11km / 626m +, Milano TISSOT: 25km / 13m +.
As in the previous two rounds, all participants in the last phase will earn points for a final lottery, where more than one hundred prizes will be awarded.