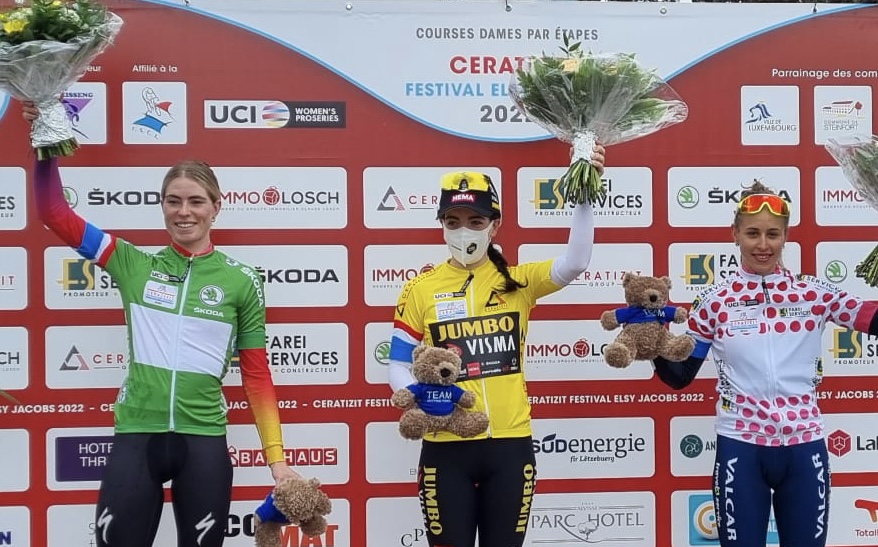 Anna Henderson has won the prologue of the Festival Elsy Jacobs. The British time trial champion started as one of the last riders and was more than one and a half seconds faster than Demi Vollering who finished second. The prologue ended up being a black-and-yellow party. All riders of Team Jumbo-Visma finished in the top fifteen.

Before the stage race began, Team Jumbo-Visma had to deal with a setback. Amber Kraak was not fit and had to skip the race. As a result, the team started in Cessange (Luxembourg) with only four riders.

They did everything they could to show themselves. Jip van den Bos was the first rider to start for the team. She rode a solid ride that was rewarded with sixth place. Noemi Ruëgg finished fourteenth. Karlijn Swinkels came only six hundredths of a second short of the podium and finished fourth. It was then up to Henderson to achieve a good result. The British rider did this with flying colours. She clocked a time that no one could match.

Henderson had already ridden a solid spring and was finally able to win. “It took me some time to recover from Liège-Bastogne-Liège last weekend. It’s great to get my first win of the season and do it in my champion’s jersey. It was a course for riders with a punch and it was very technical. You can have all the power in the world, but if you don’t go through the corners quickly, you can’t win here. I explored the course at least fifteen times. That worked well. It was a matter of giving everything until the line.”

Race coach Carmen Small is proud of her team.
“They did a great job today. It is impressive to finish with all four riders among the first fourteen. Noemi also rode a very good race with her fourteenth place. Anna rode the stage aggressively and beat very strong ladies here. We have several assets now, with everyone in a good position. If we ride in a smart and tactical way, we can take home a trophy.”