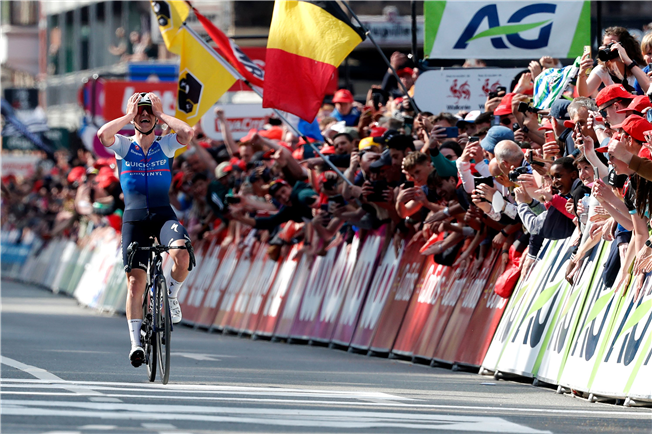 Remco Evenepoel earned a place in the history books after capturing his first Monument at the age of 22 and becoming the first Belgian rider in more than a decade to triumph at Liège–Bastogne–Liège, the world’s oldest Monument. His success came on the back of a stratospheric performance – an all-out attack launched on the race’s most iconic climb, La Redoute, and a 29km time trial all the way to Liège, where he celebrated his biggest victory to date.

“It’s amazing, truly incredible! Liège-Bastogne-Liège is one of the races I dreamed about winning and to do this at my first participation makes me very proud and happy! I want to say a big thank you to everybody – my team and teammates, my family and my friends. They always kept believing in me, even when I had difficult days, and that’s why winning today feels even more special”, Remco said immediately after the finish.

In a way it was only logical that Remco’s first Monument win would come in the Ardennes. It’s the place where the young Belgian regularly trains and which he knows like the back of his hand. It’s where, five years ago, he won the Philippe Gilbert Juniors, which finished at the bottom of La Redoute, where he took off Sunday afternoon. And it’s also a place which holds a special meaning, as evidenced by the charity work he did together with his fan club to support the victims of last year’s floods.

Sunday’s race was an eventful one, for a number of reasons. Unfortunately, one of these featured Julian Alaphilippe and Ilan Van Wilder, who were involved in a huge crash with 62 kilometers to go that forced them to abandon this final appointment of the spring classics. After a couple of confusing minutes, a regrouping took place and Quick-Step Alpha Vinyl took over the front of the bunch again with Pieter Serry, who set a ferocious tempo and reduced the escapees’ advantage to just two minutes.

At the foot of La Redoute, Mauri Vansevenant took over and drilled the pace for his countryman, who blasted away from the group, taking a handful of seconds over the chasers and setting off in pursuit of the last two men who were still in the lead from the original breakaway. Quick-Step Alpha Vinyl’s Belgian caught and dropped the two, who couldn’t live with his acceleration on Côte de la Roche-aux-Faucon (1.3km, 11%), which he crested more than 30 seconds clear off the group.

Attacks came from the bunch on a small uncategorized climb, and these halved Evenepoel’s lead, who entered the final ten kilometers with 20 seconds in hand. But Remco summoned his last resources of energy and dug deep to expand again his advantage on the flat kilometers to Liège, adding 20 more seconds to his margin and putting any doubts regarding the day’s winner to bed, despite a strong headwind. Inside the last kilometer, he began realising the towering feat he was about to achieve at his debut in “La Doyenne” and shook his head in disbelief, before crossing the line overcome with emotion, his face hidden in his hands.

“I think today was my best day ever on the bike! I woke up with a good feeling, knowing this could be my day. The race was hard, but I had a great team around me and rode stress free all the time, and all these elements helped me get inside the last hour of the race as fresh as possible. It also helped that I know these roads really well since my junior days, I knew where to be placed going into the climbs, and also that on the descent of Roche-aux-Faucons you can go full gas, which I did. It wasn’t easy with the headwind after the climb, but I kept pushing and did my best.”

“Today we showed the Wolfpack mentality, we rode as the incredible team we are and we kept believing in ourselves. We didn’t have a great spring, but we still won a lot of races and gave our best every time, despite facing bad luck and not so good moments. Having my family at the finish line and celebrating with them made this a perfect day, one I will always remember”, said after his monumental triumph the youngest rider in the last 54 years to win Liège-Bastogne-Liège.