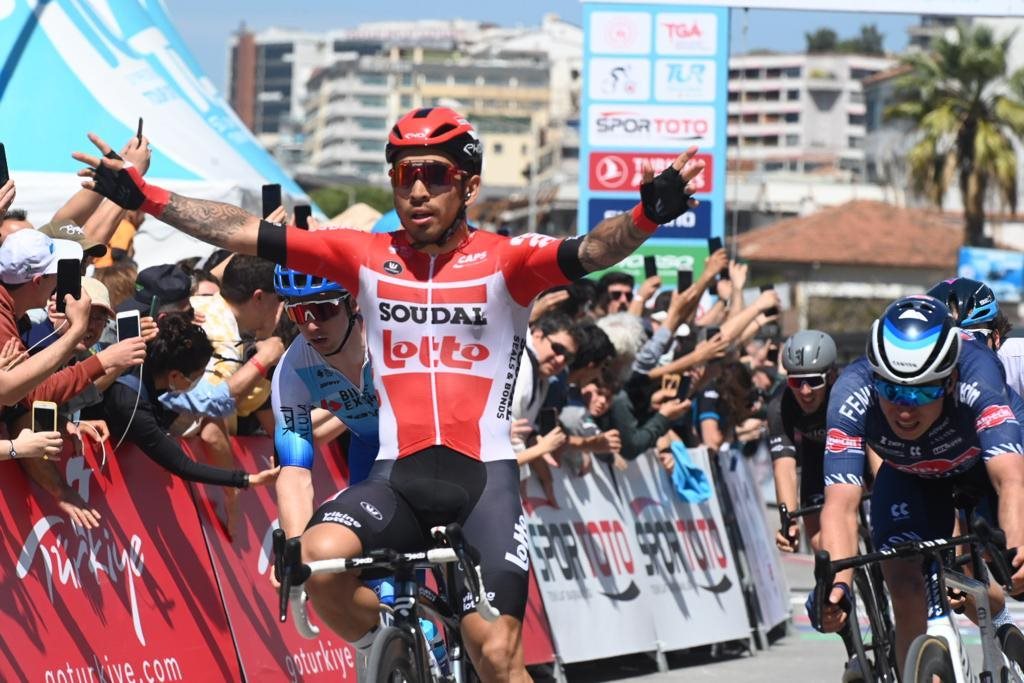 Lotto Soudal rider Caleb Ewan has immediately taken the win during his return to competition at the Tour of Turkey. At the end of a 200 kilometres long opening stage, the Australian was the fastest of a bunch which was reduced in a tricky final. Jasper Philipsen and Kaden Groves completed the podium in Kuşadası. Tomorrow, Caleb Ewan will start stage two – another possible day for the sprinters – in the leader’s jersey.

On the opening day of the Tour of Turkey, the peloton immediately faced the longest stage of the week with over 200 kilometres between Bodrum and Kuşadası. On the final official climb of the day, the peloton was heavily reduced but Caleb Ewan was found at the front together with teammates Jasper De Buyst and Harm Vanhoucke. In a chaotic final, plenty of riders made it back to the bunch with several attacks flying. Eventually, all was brought back and a sprint would appoint the winner of the opening stage. In the lightning-fast final downhill kilometres, it was Lotto Soudal that took over command at the head of the bunch. Michael Schwarzmann and Jasper De Buyst delivered an impressive lead-out, Caleb Ewan rewarded his teammates for the work and won his third Tour of Turkey stage in an impressive manner.

“Of course, it gives me a really good feeling to immediately win during my return to racing’, says Caleb Ewan. “To be honest, I didn’t feel too good at the start of this tough stage. But that seemed quite logical as I recently started training again. As the stage progressed, I started feeling better and even on the climb I still felt reasonably comfortable.”

“With several crashes on the descent and plenty of attacks it was a chaotic final but the guys did an amazing job to make it a sprint in the end. In the really fast closing kilometres we just knew we had to be in front. Michael Schwarzmann and Jasper De Buyst just executed the plan to perfection. Jasper made a huge effort to drop me off exactly where I needed to be. Then it was a case of launching my sprint and keep it till the line. This victory gives my – after missing Milan-Sanremo and some Belgian Classics – a really good feeling. The Tour of Turkey is a race I really love and it’s important to gain confidence here towards the Giro. Today was a first success but there will be plenty of opportunities to come”, the Australian already looked ahead to the coming stages.