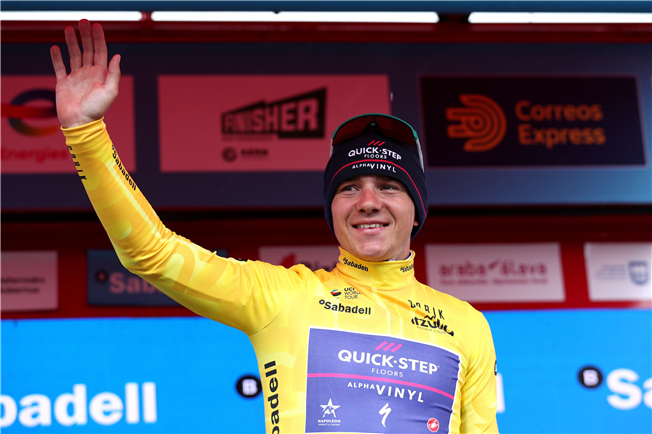 Racing with panache and unfettered energy, Remco Evenepoel shook up the Itzulia Basque Country overall standings on the penultimate day, climbing to the top of the general classification in addition to leading the youth ranking after attacking from the distance and surprising many of the other contenders.

A debutant at the Itzulia Basque Country, Remco surged clear two kilometers from the summit of the tough Karabieta ascent and drew out a select group that quickly pulled out a 25-second margin over the yellow jersey. The main force of that move, the 22-year-old Belgian continued to drive the pace on the descent, where the gap went out to more than a minute, ensuring a breathless finale for the tough stage 5, which took in close to 3500 vertical meters.

The final hill was a nasty one, averaging 8.8% over three kilometers, but kicking up to a gruelling 16% in the closing 500 meters. On that section, as lone escapee Carlos Rodriguez (Ineos Grenadiers) nabbed the win, attacks began firing from the elite group. Evenepoel promptly shut them down and took over the reins again, pushing a hard tempo to prevent any other surges and taking a solid third on the line in Mallabia, and with it, bonifications that made him the new custodian of the yellow jersey.

“When I attacked, I just felt it was the right moment, and seeing that many of the GC riders didn’t react gave me an extra boost to keep pushing. The finale was a bit hectic, with the rain making the climb even more complicated. Just 75 meters from the finish, I slipped a bit, then the guys in front of me crashed, so it was quite eventful.”

“At the finish, the guys in the staff told me I’m the new leader of the race, which was quite emotional. I am speechless to wear the yellow jersey in the hardest week-long stage race of the season and I will give my best together with the team on the last stage. It will be difficult and I expect many attacks from the distance, but we will try and I hope to have good legs”, said Evenepoel, the first Belgian rider in 33 years to wear the yellow jersey at Itzulia Basque Country.