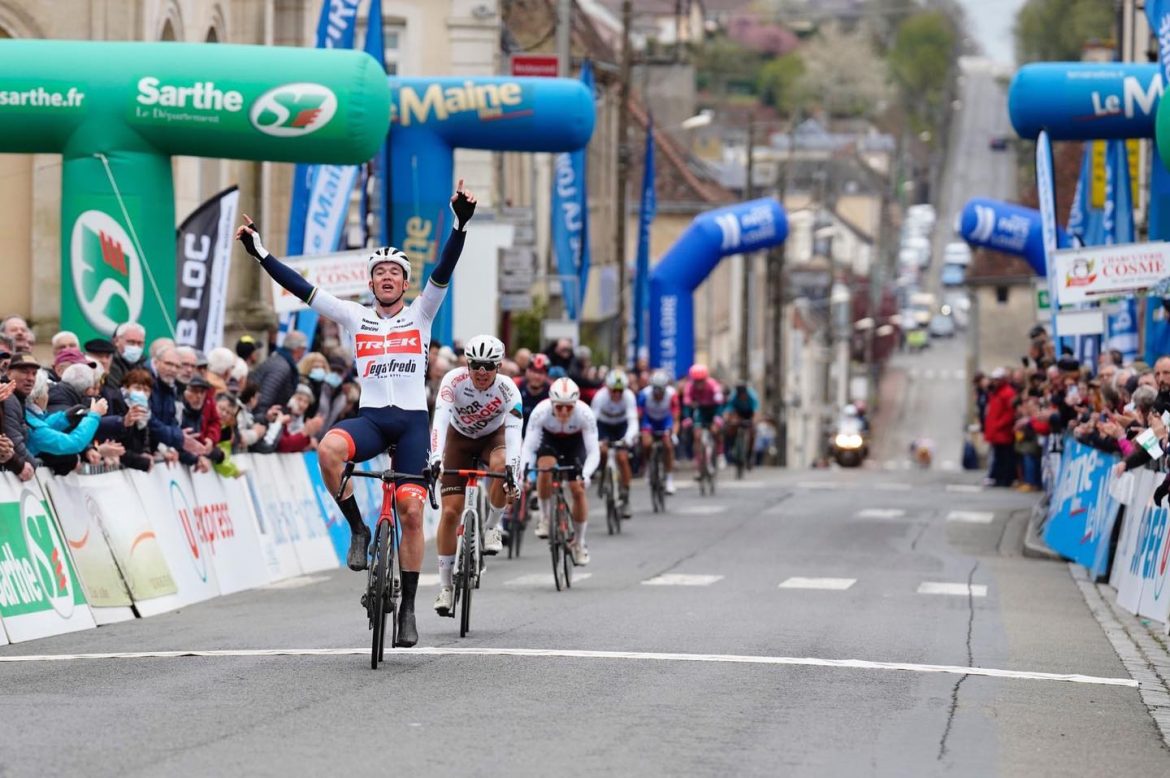 It was a thrilling finale for Stage 3 at Circuit Cycliste Sarthe, with the last man of the breakaway caught at the flame rouge and a succeeding counterattack almost stealing the victory.
Except for Mads Pedersen spoiling everyone’s chances. Again.

Kevin Vauquelin’s (Arkea Samsic) counterattack in the last kilometer was a good one. He had a gap with only meters to go and looked to have the win in the bag.
Then a Mads explosion. The race leader shot out of the bunch. The yellow jersey came over the Arkea rider just ahead of the line. Game over.

“It was not easy; the whole team worked really well,” said Pedersen, who again played off a whole-team effort to pull back the breakaway. “Alex [Kirsch] left me in a really good postion with around 1.5 -2 kilometers to go. I went in the wheels of FDJ as they had a good lead out, and then [Kevin Vauquelin] did a really good attack. That meant I had to do an early sprint to catch him but luckily it was a small uphill finish, and it was hard for a solo guy to keep the bunch away. I caught him on the finish line.”
In Stage 2, Mads opened his sprint early but the outcome was not in his favor. However, in a less-controlled finish a day later and with no time to make a calculated decision, the result reversed.
‘It was a bit of a hectic sprint,” Mads explained, “and hard to find a wheel, but the moment I found a good wheel it was quite okay. To make the decision when to start the sprint, I can’t say how I made that. It was more that I knew I had to go from afar otherwise we were sprinting for second. I would rather risk to go early for the win than waiting and finishing second. Luckily today it paid off.”

“It’s been a good week; it’s nice to have a shape like this and especially with Paris-Roubaix coming up,” added Mads. “The boys did a massive work the whole day: Filippo (Baroncini) starting pulling early, and then Kampy (Alexander Kamp) took over with really impressive work, and then Markus (Hoelgaard) to do the last bit.  We had to count a bit on a few other teams to help catch back the last guy from EF, but yeah, we were not the only ones who wanted a sprint.”

Then, the next question came: Are you strongest in the race?

A humble response. Mads will have a chance to give a more definite answer with his legs in the final day Friday, another expected stage for the sprinters.

“A huge thanks to the boys today – nice to give them a victory today. Now all eyes on tomorrow,” ended Mads.
Mads takes a 19-second lead into the final day. With his form and a strong, motivated team around him, who will take home the yellow jersey may have already been answered.