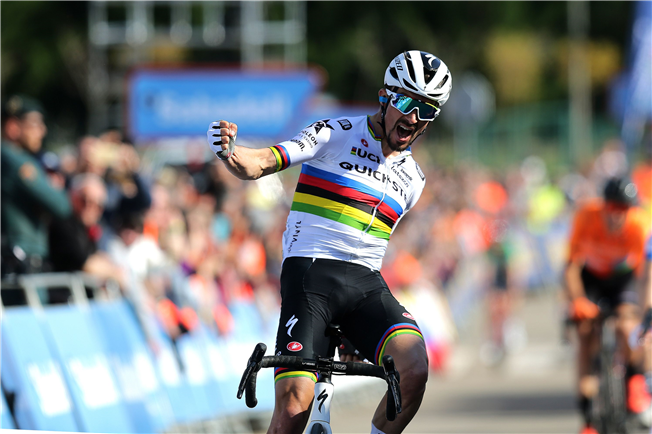 Julian Alaphilippe took a crushing sprint victory on the uphill finish in Viana, after a mammoth lead-out of Remco Evenepoel in the closing kilometer of the race’s longest stage. The rainbow jersey, who returned to racing this week after a bout of illness forced him to skip Milano-Sanremo, benefited from his teammate’s stratospheric effort, waiting for the last 150 meters to kick out and produce a devastating acceleration that netted his first win of the year.

The rolling 207.8km day that started from Leitza – a small town located in Navarre – was animated by a breakaway who forced the peloton to work hard in order to reel them in, the last member of the four-man move being overhauled only 400 meters from the line, thanks to the huge work of the Quick-Step Alpha Vinyl boys.

By powering to the line and putting several bike lengths between him and his opponents, Alaphilippe became the first ever Road World Champion to nab a win at the Itzulia, a race where he has tasted success also in 2018 and 2019.

“I like racing in the Basque Country. The amazing fans and the hard course make for a great race every time, these being just some of the reasons that made me happy to return here after three years. I didn’t have the best start to the season, but I came with a lot of motivation at the start and this victory gives me a lot of satisfaction.”

“The team was incredible today, they all did a perfect job keeping me protected the entire day and chasing down the attackers. Then Remco was perfect, pushing a huge tempo in the final kilometer and leaving me ideally placed at the right moment on this technical finale. My goal here was to take a win and now that I did it, I will try to return the favour to Remco and help him in the next stages”, said Julian – the ninth different Quick-Step Alpha Vinyl rider to pick up a victory this season.