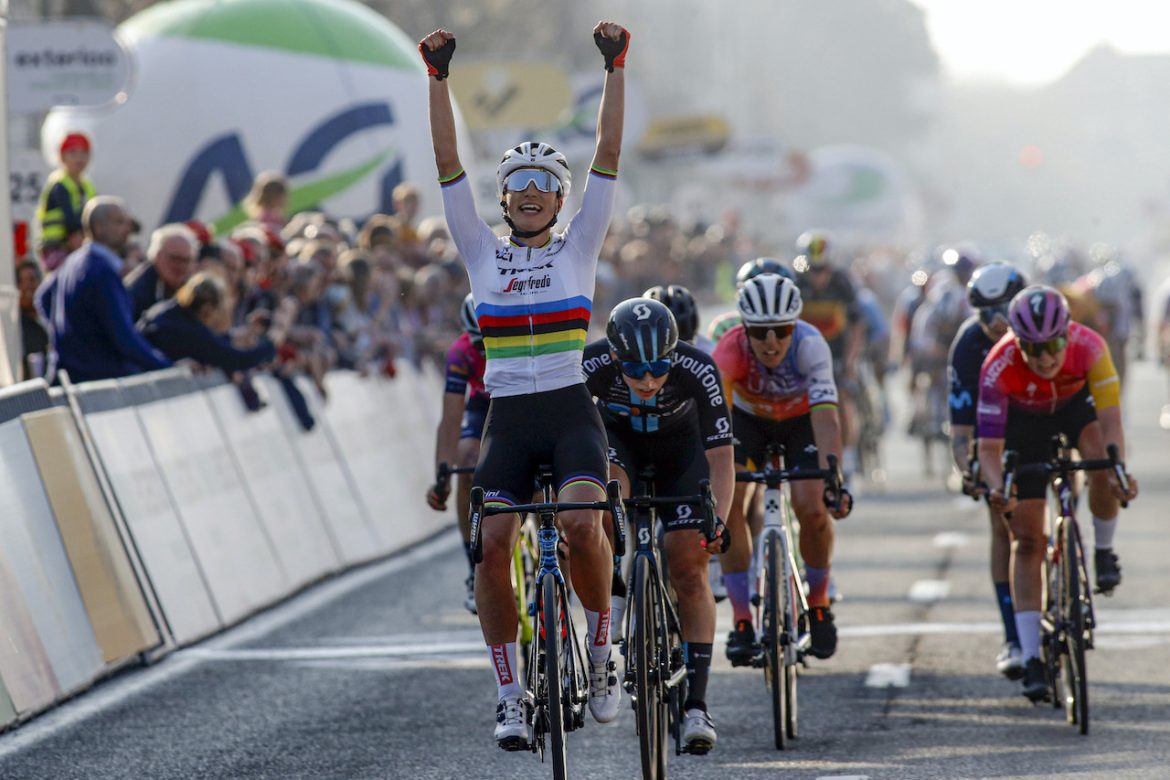 Good things happen when you have options.  Trek-Segafredo’s race plan was to work for Chloe Hosking in an expected sprint finish for WorldTour race Exterioo Classic Brugge-De Panne, but when Hosking was caught behind a late crash, Elisa Balsamo was told she was on.

“I was working for Chloe Hosking, and in the last kilometer, she told me there was a crash and I have to sprint!” exclaimed Balsamo.  “And so, it’s a big surprise, and I am very happy it worked out!”
The race was active from start to finish, with many teams trying to spoil the expected sprint ending, but Trek-Segafredo had one plan: keep everything together for our fast finishers.

The pace in the bunch was full-on for the final 30 kilometers with Lauretta Hanson and Shirin van Anrooij pushing a fast pace at the front.  A large bunch came into the finale, jostling fiercely for position, and finding the front was no easy feat.

“There were a lot of crashes in the last kilometers, it was very crazy,” Balsamo explained.  “So we were not there with a lot of riders.  There was a crash and in the last kilometer and they told me I had to do the sprint.  So I tried to find the best position, and I did a good sprint.”
A “good sprint”
meant winning by a bike length over Lorena Wiebes, who has sprinted to victory in the last three races she has started.  But a red-hot Balsamo also won her last two – back-to-back WorldTour victories after winning Trofeo Alfredo Binda four days prior.

“Winning in Trofeo Binda and then winning here – they are two completely different races so I am very happy,” continued Balsamo, and then added: “My parents are here too so I am happy they could see this.”
And when Hosking finally caught up at the finish, the two embraced.
“Yeah, we were laughing at the finish,” said Balsamo.  “Chloe congratulated me and said I did a great job.”
Good things also happen when it doesn’t matter who crosses the line first – as long as it’s a Trek-Segafredo jersey.