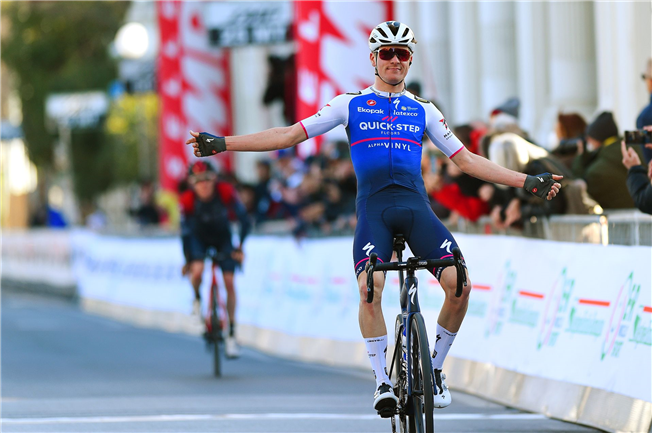 Stage 1 of Settimana Internazionale Coppi e Bartali made clear one thing: Mauro Schmid loves Italy. After breaking the ice in the pro ranks at last season’s Il Giro with a memorable victory in Montalcino following a whole day in the break that took him over the famous white roads of Tuscany, the Swiss notched up his second win on Italian soil and for the first time in his career pulled on the leader’s jersey in a stage race.

Held around Riccione over a hilly 164.2 course peppered by several short and sharp hills, the opening day of the event was animated by a four-man breakaway that was pegged back with 40 kilometers to go. The big attacks of the stage came on the Montefiore Conca, the last classified climb, where Eddie Dunbar (Ineos Grenadiers) rode clear of the bunch on the steepest part. Over the top, Mauro Schmid launched a huge counterattack, closing the gap and joining the Irishman in a move that by the time the downhill was over had a 50-second advantage over the small peloton.

The duo worked well together and continued to tap out a strong rhythm in the closing kilometers, and despite the concerted efforts of the chasing group which featured many of the race’s GC favourites, they held them off and fought for victory on the finishing straight in Riccione. Mauro produced a fast turn of legs that gave absolutely no chance to his opponent, powering like a locomotive to his first victory for Quick-Step Alpha Vinyl and the team’s 14th success of the season.

“The team was really strong and did a perfect job, keeping the pace quite high on the climbs in the final 50 kilometers, so we were always in a good position. We all knew it would come down to the steep climb inside the last 30 kilometers, I was sure that you need to be up there in the front. Dunbar went on the ascent, at which point I was suffering a bit, but I remained in the group and as soon as we crested the top, I attacked, having previously noticed everybody was looking at each other. I just went as hard as I could and nobody followed, and I soon closed the gap.”

“Then we rode the last 20 kilometers together and we kept the pace high, taking out our advantage to almost one minute. I had confidence in my sprint, because I know that it’s good at the end of the day, and just waited as long as possible before kicking out. Today everything went perfect and we couldn’t have had a better start to the week”, said Mauro after the podium ceremony, where he took the leader’s, points and youth jerseys.

“I think Italy is a good place for me. I like the roads and the terrain suits me quite well, and bringing it home today makes me very happy. Taking my first win with the Wolfpack it’s fantastic, I already felt good in Oman where I finished top 10 overall last month, but this success takes some weight off my shoulders and makes me really confident for the upcoming stages here at Coppi e Bartali”, concluded the first Swiss rider in 12 years (and just the second in history) to get a win at the Italian race.