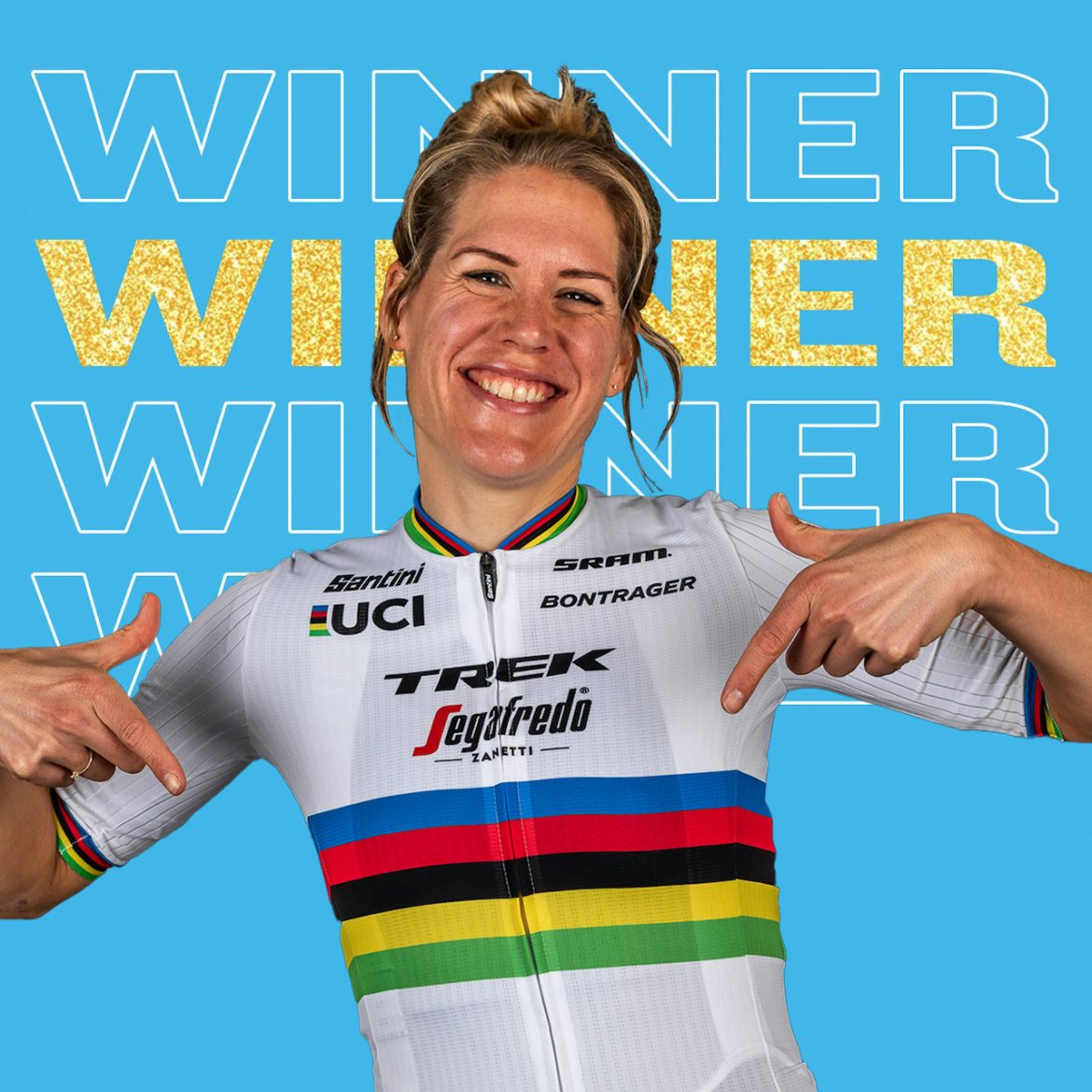 The rainbow stripes carry weight, but time trial world champion Ellen van Dijk shouldered it well in her first test of the season, winning Stage 1 at EasyToys Bloeizone Fryslân Tour.
“My main goal was to really enjoy this race in the rainbow jersey and go as fast as I could of course, but not just expect to win because I have the jersey,” said Van Dijk. “It was special to ride in the jersey today and even more so to win in it, especially because the competition was high with Reusser here, who was my main competitor at the Worlds which was really close.”
Ellen Van Dijk blasted through the flat albeit technical 14.4-kilometer course in a time of 18 minutes and 34 seconds to set an early benchmark.
“The course was pretty technical with quite a bit of corners and only 14.4 kilometers, so not my favorite length,” explained Van Dijk. “I could push good watts on the straightaways, but the corners, especially the accelerations after, are not my forte.
“It was a challenging course, not very smooth either which makes a difference but I felt quite good. I could push a little harder on the way back than the way out – I am always a bit of a slow starter,” she added.
When compatriot Markus Riejanne (Jumbo-Visma) finished seven seconds in arrears doubt arose.  It turned into a stress-filled wait in the hot seat.
Van Dijk explained: “When I heard I was only seven seconds faster than Markus, and last year I was quite a bit faster than her, I thought it would not be enough. But Markus did a very good time trial. Still Reusser is a super strong rider and was riding well already in the last couple of races. Last year she always beat me in shorter time trials so I expected her to be better than me.”
Victory was not assured until the final rider, nemesis Marlen Reusser, crossed the line, and  when the European time trial champion stopped the clock 25 seconds slower, the celebrations began in the Trek-Segafredo encampment.   “It was a long wait – around one hour – before I heard I had won. I am super happy, super excited!” exclaimed Van Dijk.
Van Dijk is no stranger to the EasyToys Bloeizone Fryslân (previously Healthy Ageing Tour), winning the race four times and finishing runner-up twice in its previous 10 editions.  She entered this year’s 11th edition as defending champion, hoping to make it five.
Van Dijk takes the leader’s jersey into Stage 2 with a seven second lead over Markus Riejanne (Jumbo-Visma), and ready to defend in a battle for bonus seconds over the next two days.
“I am in the leader’s jersey but only by seven seconds; it’s very close with me and Markus so it will be crucial to race super attentive and not let any dangerous breaks go,” said Van Dijk. “It will be challenging to defend this for sure, but I will give it my all and we’ll see. It’s not going to be easy to win this race, but for me the main goal was this time trial and I am very happy to win it. Now we go on and we’ll give it our all to keep this jersey.”