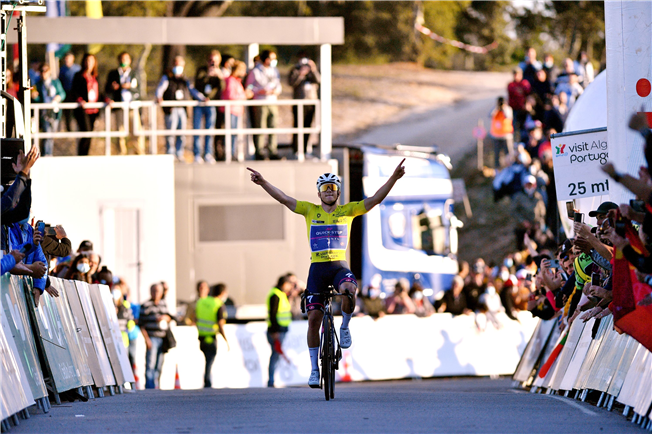 Remco Evenepoel took the honours at a stage race for the eighth time in his career, after successfully defending his yellow jersey on the final and most difficult day of the Portuguese race. The Belgian, who came into the race after finishing runner-up at the Volta a la Comunitat Valenciana, where he made his season debut, built his success in the long individual time trial, nabbing a crushing victory that put him in the driver’s seat before the final day.

Comprising five climbs, including two ascents of the iconic Alto do Malhão, stage 5 made for a route that gave little respite, the relentless up-and-down course lending itself to the attackers. After a fast and frenetic opening hour, it came as no surprise that a large group moved away from the peloton. Quick-Step Alpha Vinyl placed Yves Lampaert there, while behind Kasper Asgreen, green jersey Fabio Jakobsen and Bert Van Lerberghe protected the overall leader.

The first big moves from the GC contenders came with 25 kilometers to go, when several riders tried to put pressure on Evenepoel. Louis Vervaeke was the first to claw back those men, before the yellow jersey took matters into his own hands, getting out of the saddle and keeping things together as they crested the penultimate climb. Just before the summit, Lampaert linked up with his teammate and did a monumental job on the descent, picking up the remnants of the breakaway and setting the tempo all the way to the base of Alto do Malhão (2.5km, 8.9%), where Louis Vervaeke took over until the flamme rouge.

As soon as that happened, Remco got out of the saddle and pushed such a strong tempo that he made it impossible for his opponents to attack until 200 meters to go. Having a more than comfortable buffer over them, the Belgian came home a few seconds behind the front quartet, celebrating arms aloft his eighth GC triumph and Quick-Step Alpha Vinyl’s ninth victory of the season.

“It feels amazing to get another stage race victory for the team and I can’t tell you how happy I am that I could bring it home after a hard week of racing. The whole team did a tremendous job, not just today, when they protected me and rode at the front, but the entire week, so I want to thank them for that. This is the Wolfpack spirit and we showed it again, and we can be proud of what we achieved here.”

“My opponents attacked me today, but I had good legs – although I could feel the effort of Saturday’s time trial – and that’s why on the last climb I pushed a high tempo. Then, in the final 200 meters, when I was sure of my success and the others began sprinting on that flat part, I took some time to celebrate my win and this yellow jersey. Now I will go home and prepare for Tirreno-Adriatico, a beautiful race that I am eager to discover”, said Remco, who was first also in the youth standings, after his second triumph in three years here.

Fabio Jakobsen was another Quick-Step Alpha Vinyl performer at the Portuguese race; the Dutchman racked up two victories this week, taking his overall tally at the race to four wins in three outings, and finished at the top of the Volta ao Algarve points classification for the second time in his career.