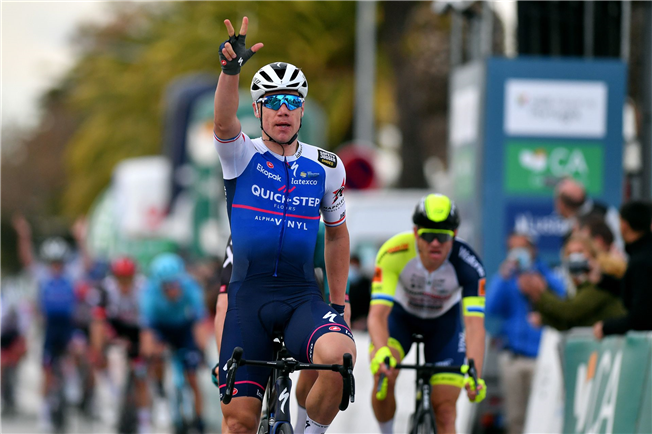 Fabio Jakobsen picked where he left off at the Volta a la Comunitat Valenciana two weeks ago, dashing to victory on the opening day of the Portuguese race, a success which brought him numerous visits to the podium, where he was awarded not just with the trophy, but also with the yellow and green jerseys for leading the general and points classification.

Traveling from Portimão to Lagos over almost 200 kilometers, the stage was marred by several crashes that left a depleted peloton for the final hour of racing. Having previously controlled the breakaway’s gap, Quick-Step Alpha Vinyl continued at the front, and Tim Declercq set a strong tempo that put the bunch in a single file as they approached Lagos, where the riders had to negotiate two tricky roundabouts.

A hugely impressive pace-setting from Remco Evenepoel split the group ahead of the flamme rouge, leaving Quick-Step Alpha Vinyl in a perfect position for the final kilometer. There, Yves Lampaert and Bert Van Lerberghe gave Jakobsen another superb lead-out, and the Dutchman easily beat his opponents, winning by several bike lengths and putting his name on the roll of honour in Lagos for the third time in his career, after 2019 and 2020.

“It was a perfect day! The entire team did a great job and this is their victory too. I am happy I could finish it off and take my third success here and my third of the year. We pulled the entire day with Tim, who was again outstanding, then Louis and Kasper made sure we were in a good position for the closing kilometers. Remco led going into the roundabouts, before Yves and Bert provided a dream lead-out. All I had to do was hit the front with 200 meters left and go for the win. I am happy with this victory, with having the yellow jersey, but also with seeing many fans along the road and at the finish today”, said a delighted Fabio, who was joined on the podium by Remco, the leader of the youth classification.