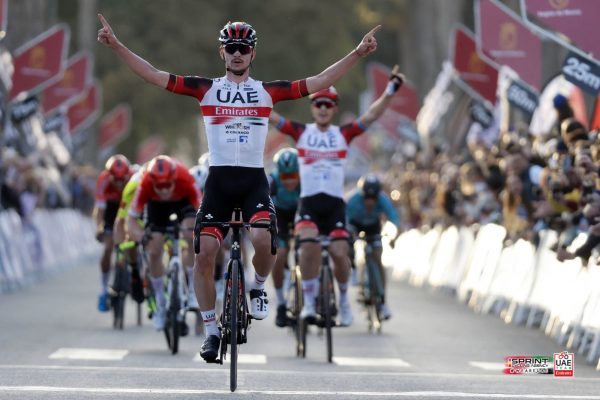 Alessandro Covi took a special first professional victory as he broke away inside 5km to go to win solo at the Vuelta Murcia classic in Spain today.

The 23 year old talent played his cards perfectly with a well-timed attack just as his teaammate Brandon McNulty came back into the fold.

McNulty formed part of the days main breakaway and the in-form American eventually went solo with a gap of 30 seconds over the top of the final climb with 25km to go.

The chasing bunch was too strong but UAE Team Emirates played its tactics well with a counter attack from Covi which would never be brought back as he threw his arms in the air.
Matteo Trentin topped-off the dream team performance to take 2nd place.

This marks the third victory of the season for UAE Team Emirates, with the Tour of Oman and Vuelta Almeria to come on Sunday.

Covi: “We had a plan from the start that Trentin would stay for the sprint and I would attack if Brandon was brought back. I managed to arrive alone for my first win in the pro ranks and I’m very very happy.

It was a hard last 5km but when I could sense the victory I was able to push hard and go full gas for the win. Trentin did well to take second and McNulty also put in an amazing ride. I’m really happy with all the team and the staff, I owe a lot to them.”