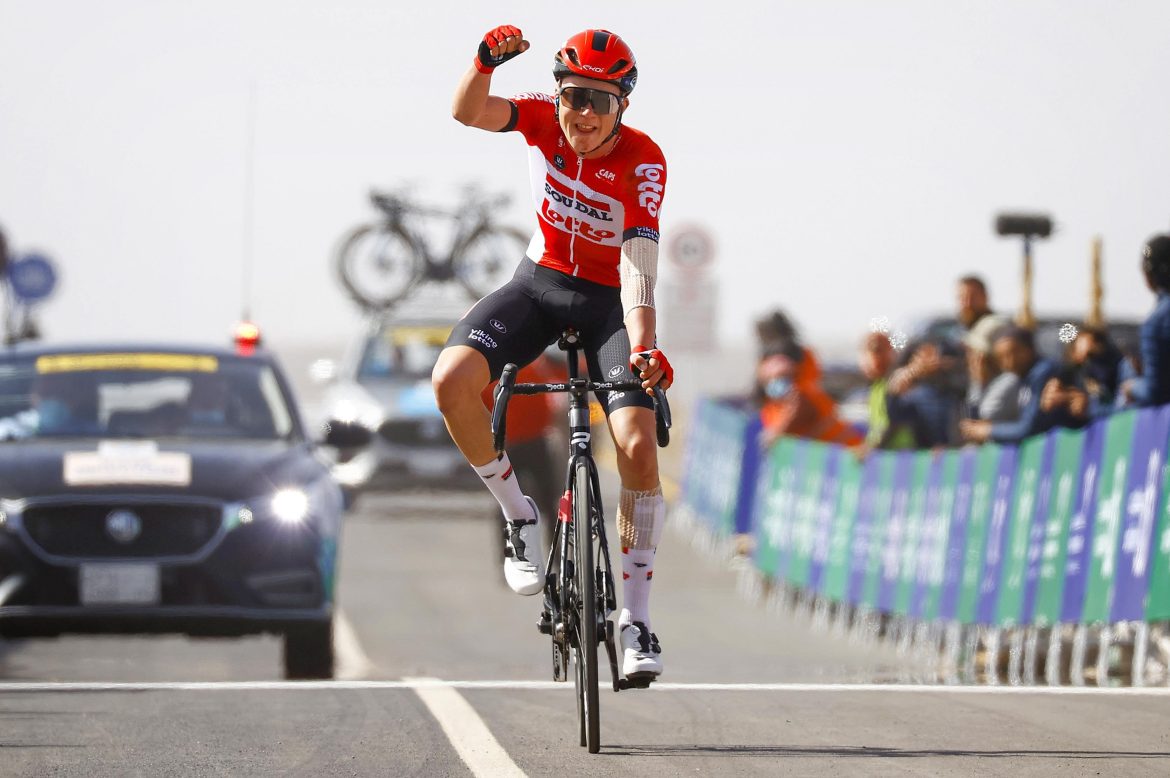 Echelons, a climb with peaks to 22 percent and a solo victory for Lotto Soudal: the fourth stage in the Saudi Tour had it all. Maxim Van Gils won the spectacular race and also takes the green leader’s jersey with a 36 second lead in the general classification.

What a day it was for Maxim Van Gils. The 22-year-old rider from Brasschaat showed himself in the first echelon all day long. Roger Kluge and Jasper De Buyst put him in perfect position in the first group of 18 riders. Van Gils was the best placed GC rider in the group. Very quickly their lead rose to over a minute.

15 kilometers before the finish was the toughest climb of the Saudi Tour, with peaks to 22 percent. Van Gils showed himself there as the best climber of the group and topped the climb solo with a 30 second lead. Behind him the field was shattered. In the last flat 8 kilometers, the Lotto Soudal leader managed to build his lead even further. Finally, he reached the finish line at Harrat Uwayrid with a 40 second advantage.

“What a special feeling”, said the winner immediately after. “I do not win that often. That I managed to do so today, is very special for me. I had a very good day, the team worked hard to get me in the first echelon. Afterwards, it was up to me to stay there. That I could finish the teamwork in style, makes me very happy.”

Van Gils and sprinter Caleb Ewan have been motivating each other whole week. Ewan won the first stage and promised Van Gils new sneakers should he be able to get the podium of the GC. With one stage to go and a 36 second lead in the GC, things are looking well for Van Gils’ new footwear. “The team has been motivating me whole week. Tomorrow there is a new day for Caleb to go for a stage and I have to go all out for the GC. The sneaker-promise has started as a joke of Caleb, but it is becoming more serious within the team now. Hopefully, I will have earned a new pair tomorrow.”