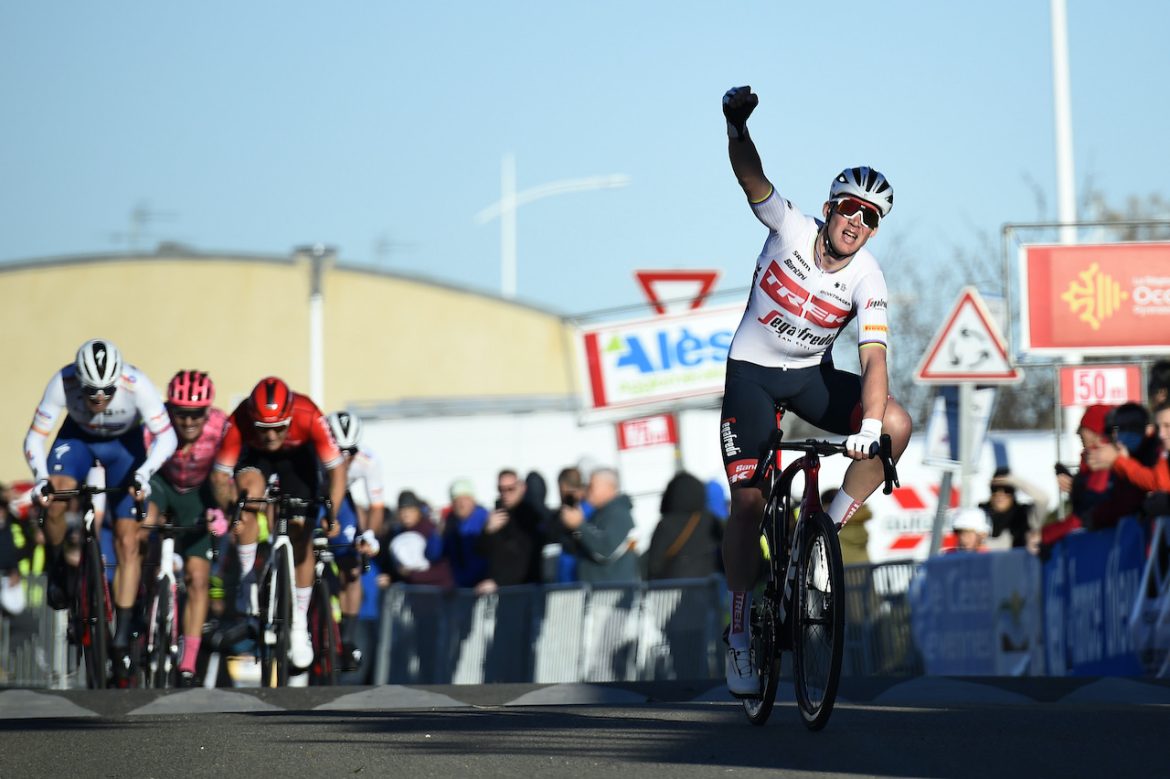 After a second-place finish at La Marseillaise at the weekend, Mads Pedersen went one better in the first stage of the French stage race, marking Trek-Segafredo’s first success of the 2022 campaign.
In his pre-race briefing, Sport Director Kim Andersen warned the team that the race would be “chaos”. Sometimes talk of crosswinds is overhyped, but today they were a very real prospect, and a warning that our riders paid close attention to. Gusts of 37kph (over 20mph) and many exposed sections littered the course in the Gard department of southern France.
The promise of chaos became reality with over 60km of racing to go. The peloton split dramatically – around 25 riders held the lead whilst behind the main group scrabbled to recompose itself, and thus begin the pursuit of the leaders. Alongside Pedersen was his right hand man, Toms Skujiņš, who himself is in training for a tilt at the classics. The Trek-Segafredo boys played a smart game, not overexerting themselves early, contributing to the momentum of the group when necessary.
With 40km to go the leaders passed through the finish line – at the top of Côte de la Tour – for the first time. It was a useful exercise, as it allowed Pedersen to refamiliarize himself with the finish. As the leaders rolled through the finish, a select group of chasers used the climb to launch an attack. They came agonizingly close to the lead group of Pedersen, just 10 seconds behind at one point, but ultimately couldn’t make contact.
Eventually, it became clear that the winner would come from the 25 leaders, and many eyes were on Pedersen. The 600m but painfully step Côte de la Tour would decide the winner. Skujiņš masterfully dropped his leader on the tail of another team’s leadout at the foot of the climb. Pedersen remained calm when the attacks started, saving his winning move for the last 300 meters. When the road flattened out, the Dane had plenty of daylight between himself and second best, leaving him plenty of time to savor his first win of 2022.
After the race, Mads Pedersen dedicated the win to our beloved mechanic Pepinho, who sadly passed away last week.
“It’s always nice to win. It was really close on Sunday. It’s just nice to start the season like this, and especially to give Pepinho a victory, he would have loved to have been here with us. Today was definitely a win for him, from the whole team. I’m getting a bit emotional about it.“It’s nice, it’s a good start, but some things are more important in life. We showed him that we are fighting for him and hopefully he is still looking down on us.
“The whole team helped me out really well. It was a special day, we had to be ready for crosswinds but there wasn’t so much in the end. They appeared, then went over and over. At one point it split, and I was in the second group, so I had to jump across to the front group. From there we were turning and doing the minimum because we didn’t care about the GC. The split came in an unexpected place, so we missed a few guys and even I was a bit too far behind. Luckily Toms (Skujins) was up there, helping me through the day and in the final he took really good care of me to put me in a good position with 800 meters to go. From there it was down to me.
“The final is a super hard one with a steep climb in the end, but I also know that I can do quite well on a finish like this. With Toms in the group, it was quite good, I didn’t have to do so much, and we were saving as much energy as possible which worked well for me. Direct Energie opened from the bottom of the climb, and it was ‘follow, follow, follow’. With 500 meters to go I really had to go.
“To be honest, I thought it might have been a bit too early, but I had a good gap and it was enough to pass the finish line first. It was pretty nice to be in a shape where I can do this already at this point of the season. I can build even more from where I am now.
“This year’s finish was quite similar to the one last year. I thought I preferred the old one, but of course now this one is better because I won here, and I was third last time.
“It’s a victory for Pepinho, from the whole team. They were great today.”