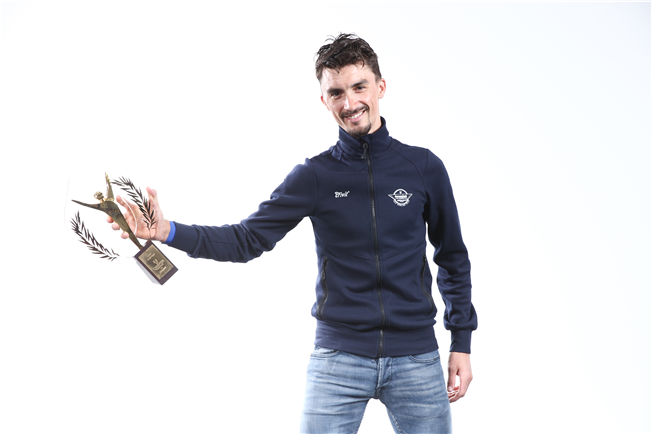 A second World Title, Flèche Wallonne, and a stage apiece at Tirreno-Adriatico and the Tour de France – it’s been another remarkable season for Julian Alaphilippe, who exuded panache every time he raced with the rainbow jersey on his shoulders. Of course, the cherry on the top was his astonishing victory in Leuven, where a massive show of strength, class and determination helped him become the first Frenchman in history to capture back-to-back World Championships.

Alaphilippe’s performances haven’t gone unnoticed, and after in December he received a third Vélo d’Or Français, now he made it a hat-trick of victories also in the Champion des Champions – which is awarded every year since 1946, thus joining Michel Lazy, Guy Drut, Bernard Hinault and Alain Prost as the only French male athletes to collect the prestigious accolade on at least three occasions.

“This trophy gives me a lot of pride and joy. It’s beautiful to get it just once, but now I have received it for each of the last three years and it’s really incredible. It comes after a season I will never forget, a season where I raced for the first time in my career as World Champion and felt how special it is to wear the rainbow jersey. At the same time, this award is something that motivates me a lot for next year, when I want to give my best again, regardless of the race, honor this iconic jersey and just enjoy every moment with it”, a happy Julian said.