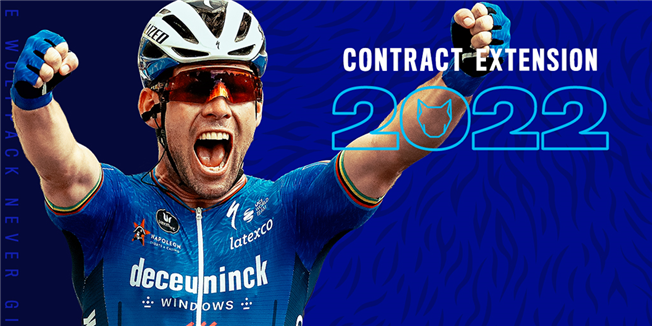 Deceuninck – Quick-Step can announce that Mark Cavendish will stay with the team for one more season. After rejoining them at the start of 2021 in what turned out to be a history-making season, Mark is now in his second spell with the Wolfpack, a period that has so far seen him win for the first time in three years, take the Tour de France by storm in winning four stages and the Green Jersey, and equalling the record for the most stage wins at the famous race.

Having previously ridden for the team from 2013 to 2015, the year kicked off for the man known to so many as simply ‘Cav’ when he won stage 2 of the Tour of Turkey, where he would go on to rack up three more victories. This was followed by a win on the final stage of the Belgium Tour, but his most noticeable victories came at the Tour de France, a race that he already had a historic relationship with.

Coming into the 2021 edition, he had already won 30 stages at the world’s most famous race, and after his late call up to the team he came in with the eyes of the world looking on him curiously. Ever the showman, Cav would not disappoint, by taking an emotional victory on stage 4 in Fougères, which brought tears to the eyes of fans around the world. He would follow that up by taking three more stage victories, which made him the joint record holder for Tour de France stage victories, alongside the great Eddy Merckx, and the first rider to win at least four stages in six different editions of the race.

He also showed his grit and determination in the tough mountain stages to make it to Paris and secure the iconic green jersey for the second time in his career, setting a record for the most years between two points classification triumphs, with a 10-year difference.

Speaking of his new agreement, which will run to the end of 2022, Mark said: “I am incredibly proud and happy to have agreed a new deal with Deceuninck – Quick-Step. One year ago, when I came to the team, I did not hide my admiration for what this team does and how happy I was to be back here. I knew from my first time here that this squad has a unique family feeling, and it is a culture that remains to this day. The last 12 months have been phenomenal and the support that I have had from the team and the staff has made me very emotional at times. I am really looking forward to making some more special memories together over the next 12 months.”

This was echoed by Deceuninck – Quick-Step CEO Patrick Lefevere: “The whole world saw what he did this year. What they didn’t see though is the way that he speaks and leads within the team and encourages everyone – we have a very close group here and Mark always embodies that spirit, and while he may be the one that crosses the line with his hands in the air, he is the first to recognise the work that the team does as well, which means a lot to everyone. We are more than happy that we can continue the story with Mark for one more year.”