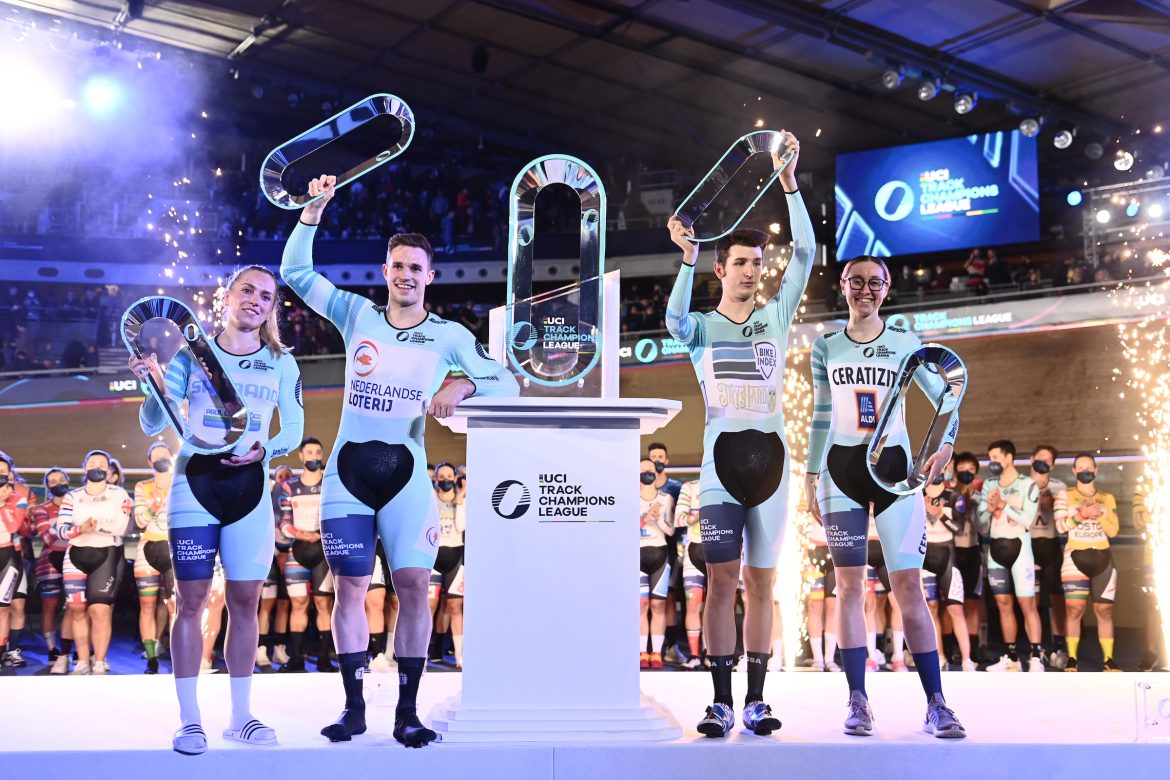 In front of a sell-out crowd of over 5,500, the Women’s Sprint League came down to the wire on the night. After a strong start in Mallorca and convincing performances in Panevėžys, five-time UCI World Champion Emma Hinze came into the London double-header with an advantage of eighteen points over her compatriot and closest rival Lea Friedrich. A high-speed crash in last night’s Women’s Keirin heats reduced Hinze’s lead to just two points going into the grand finale. The German was undeterred however, and strengthened her winning margin over Friedrich on the night, who failed to reach the Sprint final and finished sixth in the Keirin.

Emma Hinze (Germany), winner of the Women’s Sprint League said:“I’m really proud that I take the jersey home because it was really close today and I didn’t know how the race would go and how much strength I can find in my body because I’m really, really tired. I think it was harder than the Olympics today because of two days of racing that much with fast races. I’m pretty proud, happy and really satisfied. Of course, my goal was to win but I didn’t know what to expect because I’ve never done it before. I knew it was going to be hard. I just try my best and I don’t think about the overall win, just heat to heat.”

In the Men’s Sprint League, nine-time UCI World Champion Harrie Lavreysen enjoyed a slightly more comfortable margin in this inaugural league. The Dutch star immediately stamped his authority on the league in Mallorca and produced consistent performances to maintain a convincing lead, despite challenges from Germany’s Stefan Bötticher. Tonight’s final round saw Lavreysen and Bötticher take one win each, leaving Lavreysen victorious overall.

Harrie Lavreysen (Netherlands), winner of the Men’s Sprint League said:“It was really, really good. I’m really happy with the win. After the first heat, I knew I took the jersey for the overall win and that made it really, really special. And I think I’m unbeaten in two years now in the sprint so I really wanted to keep that streak. And I’m really happy with the result. Of course when you’re the World Champion, it’s not like you expect to win but I want to win and I think I feel bad if I don’t win it. Every event that I don’t win, I need to go in with a fresh mind otherwise I make mistakes. I didn’t think a lot about winning before starting this but after this, I’m pretty happy.”

Unstoppable performances across all four rounds earned double Olympic gold medalist Katie Archibald a convincing win in the Women’s Endurance League. The British rider lit the fuse in several explosive Scratch and Elimination races, and enjoyed roaring support from the London crowd this weekend. Tonight, Archibald secured her place in history with a victory in the Elimination and lifted her trophy in front of the British audience.

Katie Archibald (Great Britain), winner of the Women’s Endurance League said: “This title means a big deal, more than that – just how professional it has been, just how much support we’ve had, and the amount of amazing feedback I’ve had. This is year one, Discovery are locked in until 2029 – I just feel so confident that it’s going to go from strength to strength. I’m proud to have been backing it from day one. I would have really loved to go to Israel next week. But selfishly, it feels pretty good to do it here in the UK.”

The Men’s Endurance League on the other hand, was decided at the very last race of the series after a tight contest from start to finish that could have gone either way. In Mallorca, Corbin Strong (New Zealand) took two wins from two to open up a seemingly decisive lead. Lackluster performances in Lithuania however, coupled with a superb ride from Spain’s Sebastian Mora, quickly changed the shape of the overall standings. Mora entered round three wearing the leader’s jersey and retained it with a slim advantage over Gavin Hoover (USA) and Corbin Strong. In tonight’s round four however, things unravelled for the Spanish star, with relegation to fourteenth from the Scratch race for causing two riders to crash behind, ending his championship campaign. Gavin Hoover’s sixth and fourth place finishes on the night secured him the overall win.

Gavin Hoover (USA), winner of the Men’s Endurance League said: “I don’t quite believe it. I was just so excited to be here and get the invitation after the World Championships and I thought, no matter what happens, it’s a success. To win, it’s just incredible and at a new series which I hope is the future of track. I definitely didn’t expect it. I thought I could be competitive but I looked at the start list on the day and thought everyone could win so it definitely wasn’t expected.”

The four winners each received a miniature replica of the UCI Track Champions League trophy, crafted by the renowned GDE Bertoni – creators of the FIFA World Cup trophy.  The original is 94cm tall, adorned with an LED strip and reflects the shape of the track. The four leaders’ names were engraved on the night.