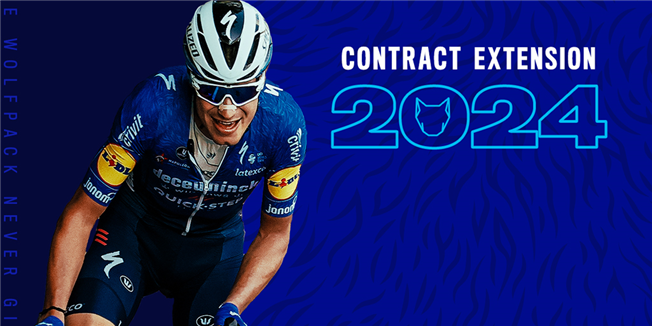 Fausto Masnada’s 2021 season was one filled with both ups and downs. The 27-year-old Italian took a strong third spot overall at the Tour de Romandie, unfortunately bad luck was around the corner as knee tendinitis made him step out of the Giro d’Italia. Fausto came back at the nationals with a second place, but a crash at the Settimana Ciclistica Italiana again put him off the bike for a long recovery period. Despite all these setbacks, he switched goals, kept working hard and ended his season in a fantastic way at Il Lombardia as runner-up.

The hard work paid off. Patrick Lefevere, CEO of Deceuninck – Quick-Step, agreed on a three-year deal being convinced about Fausto’s capacities: “Fausto had a hard year, having several setbacks. But he kept working hard, his positive mindset and attitude is what you need to take the most out of it. Every time Fausto raced, he showed what a great asset he is, how he can go full gas for a teammate or go for his own chance whenever he can. I’m happy he could finish off his season with such a strong result at Il Lombardia, and who knows what the future brings. Having him with us for three years longer is fantastic.”

Fausto couldn’t be happier. “When you’re in a team like Deceuninck – Quick-Step, you realise it’s a dream. This year we won the World Tour classification, we’re the strongest team. If I would change teams, I would change for what? Secondly, I like how it’s all so professional here and how they study everything. Everything is perfect and each member of the team always aims to improve. I believe in the future of the team and I’m here to continue to grow year by year, as I know I can still step up. It’s a magical team, it’s a big family. It’s not just a job, but you feel a real friendship”, Fausto smiles.

Looking back on his season, the Italian rider has a lot to remember, good and bad. “The first part of 2021 wasn’t bad, not bad until the start of the Giro. The team started the first races in a good way. I was super satisfied then as I took third in the GC in the Tour of Romandie. Until this moment my season evolved in a good way. Then the Giro came and I couldn’t perform well as I had knee tendinitis. I was super sad about stepping out of the Giro, I worked so hard for this first goal and I couldn’t reach it.”

“Also for an Italian rider the Giro is the most important race of the year, especially for a rider with the characteristics like me. I worked a lot on an altitude training camp together with João and Remco before the Giro, to help them and at the same time to perform well myself. The first ten days after I felt really bad, but then I switched my mind and I thought ‘okay the Giro returns every year’ and I looked forward.”

“I fixed my mind on other goals, less than one month after the Giro the nationals were there and I didn’t know if I would reach my normal level. I really like the national championship, if you win you wear the Italian jersey for one year. In Italy that really means a lot, as everyone watches this race. In this case I don’t know if I was unlucky or I just met a stronger rider than myself, as I became second.”

“But again, bad luck was around the corner as I crashed during the third stage of the Settimana Ciclistica Italiana. To have to stop and recover again was harder than the first time. I prepared so well, stayed twenty days on altitude with the team, I worked so hard and then again this, I couldn’t believe it at first. I was still thinking nothing was lost and everything would be fine, but when the team doctor told me I needed to recover one month, it was such a difficult time. Fortunately, I had the support of the team and my family who stayed with me. I wanted to recover as fast as possible, I was scared about the fracture as well. It was the first time I had a fracture on my back, I called the doctor several times a day just to know what I could or couldn’t do. It was such a long time, it felt like ten months instead of one.”

“I tried to stay positive, it was the first time I also didn’t follow the cycling races. I just switched off, I didn’t read the news or watch the races. I read some books, watched some tv series and friends came by to help me pass the time. Then I started to ride my bike again. After three, four rides I could start to train harder again. I was positive to come back strongly and to reach some goals before the end of the season.”

“I restarted at the Tour of Luxembourg, my comeback race. I was super happy for myself and the team, because I worked hard and I felt well. Before Luxembourg I felt good on training, so together with the team we decided I could race again already at Luxembourg. If I wouldn’t have felt well, I wouldn’t have restarted there, as in that case I prefer to train harder and then go to the race. I don’t like to just pin up a number without any goal, I race to perform well.”

“The Tour of Luxembourg, my comeback race, really gave me confidence for the Italian races. It really felt like a victory to me, to come back strong after a hard recovery period. I had some goals set for the end of the season. Especially Il Lombardia was in my mind. This is a race in my home country, I know the roads and everyone would come to support me. The selection in this team is never easy with a lot of strong teammates, so you need to fight for your spot in a monument like Il Lombardia. I tried my best in Milano Torino, in Coppa Bernocchi I took third spot, the team believed in me and I got a place in the squad for Lombardia.”

“I think the second place there was the highest possible. I found a strong rider on my way to Bergamo, he won two times the Tour de France, so I knew it would be difficult. I couldn’t do anything more. I’m happy with that second place. To finish in Bergamo was unbelievable. The last climb was amazing, everyone was supporting me. And now when I analyse my season, seeing how I fought my way back, I think I can be satisfied.