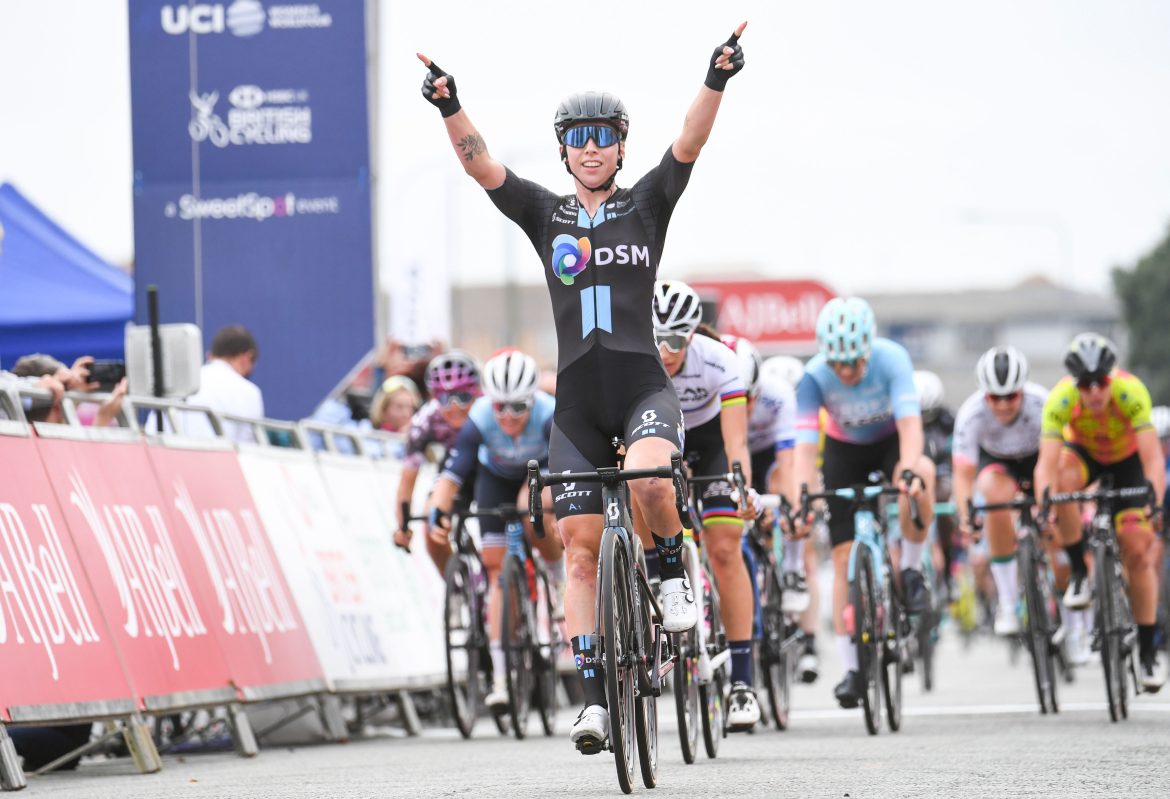 Lorena Wiebes became only the second rider in AJ Bell Women’s Tour history to claim back-to-back stage victories when she produced another dominant sprint to win in Clacton-on-Sea on Friday.

Only Dutchwoman Wiebes’ compatriot Marianne Vos had previously won consecutive stages of the UK’s most prestigious women’s race, a run that coincidentally started when Vos also won in Clacton-on-Sea during the 2014 edition.

Race leader Demi Vollering (SD Worx) finished safely within the peloton to move closer to being crowned the race’s overall winner, although for a large part of the day British rider Hayley Simmonds (CAMS – Basso Bikes) was the virtual blue jersey following an audacious solo attack on the roads of Essex.

“We put Liane [Lippert] in the front for the chase and everything was under control actually so that was good” said Wiebes afterwards.  “With the lead-out we were a bit too early in the front. It was a bit chaotic but in the last bend I found my way to the front and almost directly started my sprint.  So I came with some speed from behind and it worked out pretty good we controlled the day.”

The story of the day looked like being Simmonds’ performance, after the time trial specialist attacked seven kilometres out from the start in Colchester. Having started the day 2:55 behind Vollering on GC, she amassed a lead of four-and-a-half minutes with 50 kilometres remaining.

However, a mix of action in the peloton on the ŠKODA Queen of the Mountains climb at Manningtree combined with Simmonds’ fatigue saw her caught just 15 kilometres outside of Clacton.

Wiebes again looked unstoppable once she had started her sprint along Marine Parade West and duly claimed her 12th victory of the season. Race leader Vollering finished out of trouble in 30th.

“My team were totally in control today,” said Vollering. “They went on the front and did a few turns and keep the speed a bit high and then bring back the break so that was good.

“Tomorrow we need to keep it together and make it a good race again.  We don’t have a plan yet; we need to see first, look a bit better at the route and then we will see.”

Thanks to her victory, Wiebes moves into the lead of the Sigma Sports points jersey, two points ahead of Chloe Hosking (Trek-Segafredo), who added a fourth-place finish to her second (Banbury) and third (Southend-on-Sea) already this week.