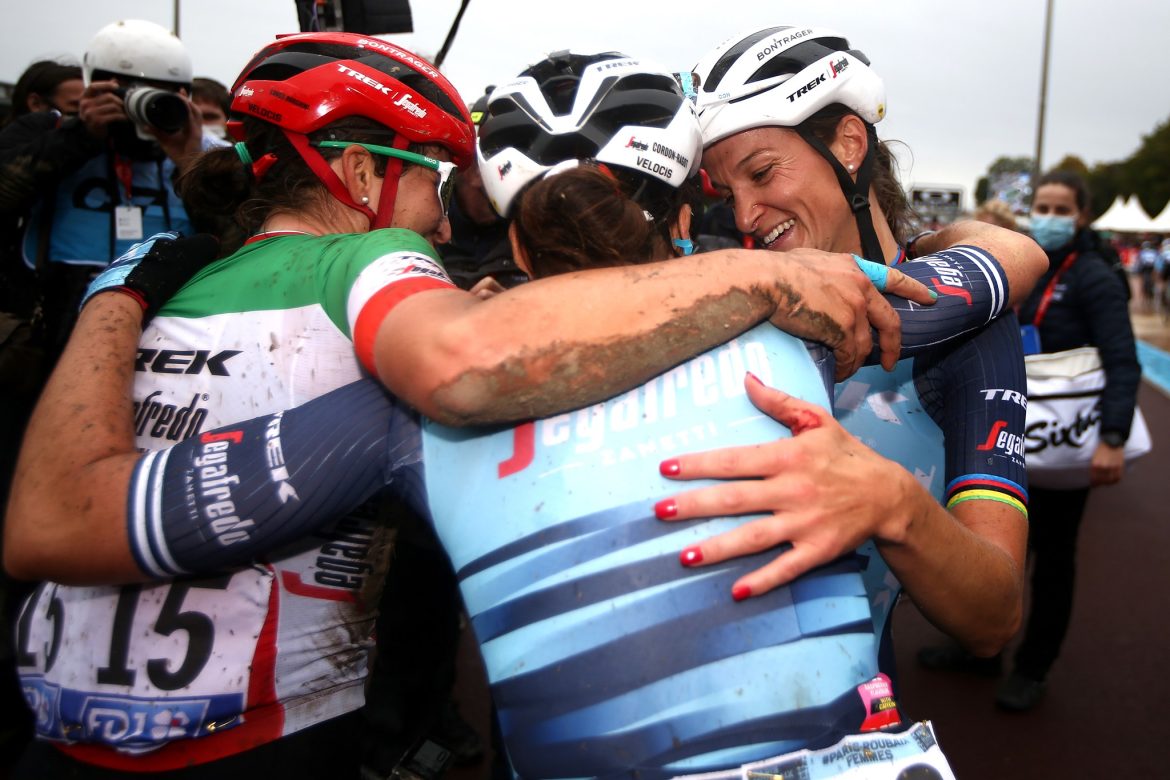 Lizzie Deignan soloed for over 80 kilometers to win the first edition of Paris-Roubaix Femmes.
Elisa Longo-Borghini makes it two on the podium for Trek-Segafredo, arriving alone into the velodrome for third, behind Marianne Vos who took second.

LIZZIE DEIGNAN:“I feel very emotional. I don’t know, I am just really proud. Sorry, not the best quote, but I am just so happy. I cannot believe it happened.”

“At the start of the day we said, ‘you know the rulebook: anything can happen’.  I was just fighting to those first cobble sections, and I knew that Ellen (van Dijk), one of our leaders, was not in such a good position. And I though well if at least I am there I can cover something. And when I looked behind no one was there, and I thought ‘well at least then they have to chase.

“I was really riding with the insurance that Ellen, Elisa (Longo Borghini), and Audrey (Cordon-Ragot) were behind me. We had the best team in the race and that’s why I won.

“I didn’t know I was going to win until I entered the velodrome! Because honestly, I couldn’t hear anything, my legs were cramping, and I knew that even on the last section you could lose two minutes if you cramp and blow up. I really just tried to keep a regular pace. At this point in the season, I am tired and I knew the best thing for me was to keep this steady pace and keep in front as long as I could.

“We didn’t have a chance to dream for so long; it’s always been a men’s race. and I am just so proud of this is where we are, that women’s cycling is on the world stage now. I am proud that my daughter can look at the [cobblestone trophy]. She doesn’t just have to watch men on the TV anymore, were here and we’re representing and it’s thanks to support from people like those in Trek-Segafredo that we’re here. We need people that support women’s cycling and believe in us. I am just so grateful for all these people – and all those at home watching today, you make a difference too. So thank you.”

Now your name’s in the history book: “It’s pretty special to be able to say that. I am really proud that we are here, and we deserve to be here; I am proud of the whole peloton.

Was it a plan to go so early? “Absolutely not, who makes that plan? I think the plan really was there was no rulebook today. We came in with Ellen and Elisa as leaders and I was the third person to be around and look after them, but I could feel they were not in great position coming into the first cobblestone section.  I was there and when I looked behind I had a gap.

“It was really painful. I felt  in control and I knew I needed to be in control because you couldn’t go over the limit. If you blow in the cobbles you really stand still and that was my fear.
“I heard at the end that Vos was chasing  and coming fast and I said, ‘oh no!’ It’s never nice have Marianna Vos chasing you, but I knew that I had just enough time.

Entering the velodrome: “It was surreal. I have been watching men do it for years and to say that I am the first women to do it is pretty special.”

How she got away: “I carried speed onto the [first] cobbles and got a gap. I I thought as long as they have to chase me it’s good for my teammates – my leaders – behind. I wasn’t thinking about the victory at that point.
“This will take some time to settle in, but I will have a cobble to look at for years to come, so I am really proud.

ELISA LONGO BORGHINI:“It was a really incredible Paris-Roubaix and I don’t think there is anyone who deserved it more to be on the top step of this podium. [Lizzie Deignan] made history, we made history. It’s hard to acknowledge this, but it’s just an amazing feeling. There’s no better person who could be on the top step today.
“The cobbles today were really slippery, and I crashed 3 or 4 times, but I always made it back. We were told to never give up if we had something because Paris-Roubaix is always like this, you always have the chance to get back and get a result. But today is all about Lizzie – she deserves all the attention because she did something really incredible.
“We were stuck behind a crash and chasing into the first section and Lizzie was in front of the crash. By instinct she got away, and instinct is something that drives Lizzie, we all know that, and today she had a sparkle in her eyes and I was really feeling she was going to win the race.”