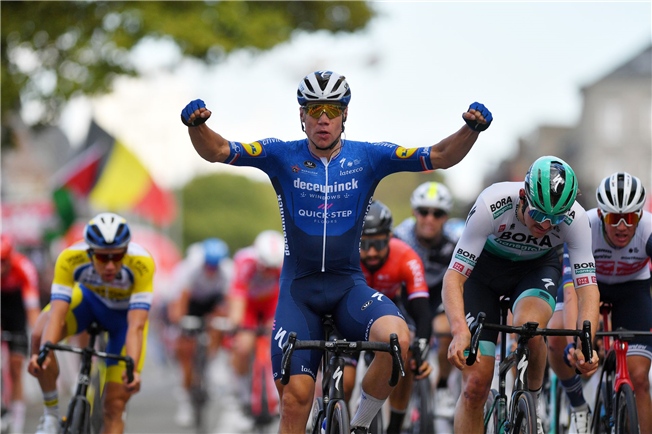 Deceuninck – Quick-Step racked up win number 63 this season, after Fabio Jakobsen capped off his teammates’ excellent job at the end of an action-packed Eurométropole Tour, Wednesday afternoon. For the 25-year-old, who returned in the pack earlier this year in Turkey, it was the seventh victory of 2021, and his second since conquering the points classification at the Vuelta a España.

Animated in the first part by a seven-man break, the race was back together with more than 50 kilometers to go, prompting new attacks on the local circuit as soon as the wind picked up. A large group snapped the elastic on the circuit’s sole climb and put around 30 seconds between them and the chasers. Deceuninck – Quick-Step had Dries Devenyns and Stan Van Tricht there, who tracked the moves, while behind the rest of the team put in a huge effort to bring Fabio Jakobsen back to the front.

Methodically, the Wolfpack reduced the advantage of the attackers and made the catch with four kilometers to go, but continued to remain in control as the flamme rouge loomed on the horizon. Bert Van Lerberghe – who turned 29 Wednesday – was once again the last man in Jakobsen’s lead-out train, and after dropping him off in a perfect position, the Dutchman kicked out and came around his opponents on the right side of the road, taking a comfortable victory in Tournai.

“I enjoyed being here with this strong team and taking another victory. The guys showed why we are the Wolfpack, they supported me and I want to thank them for their incredible work, especially as many teams tried to put pressure on us. I am happy that I finished it off and brought a win to the team on Bert’s birthday, who did a perfect job today in the last kilometers. I have one more race next week and I look forward to it, as I want to get a good result before going on holiday”, said Fabio.