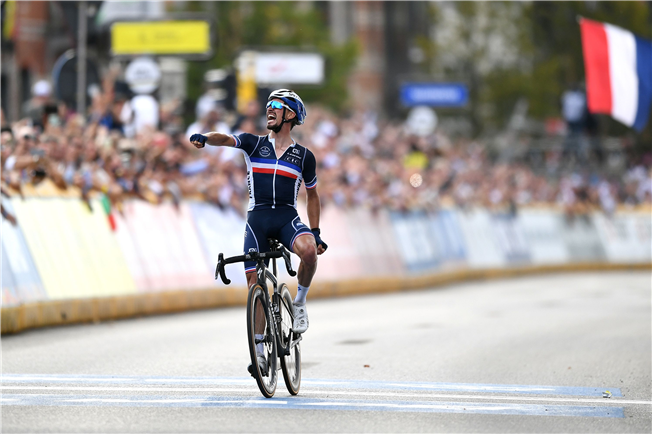 Julian Alaphilippe successfully defended the rainbow jersey, becoming the first Frenchman in history to win back-to-back titles, after producing a performance of devastating intensity and brilliance in one of the most intriguing races seen in recent years. By doing this he etched his name in to the history books and ensured himself twelve more months in the iconic rainbow jersey, which he captured for the first time in Imola, last September.

“I have no words, I am just so happy! I worked hard for this and had good legs, but I didn’t dare to dream about retaining my title. It’s insane, that’s all that I can say. An amazing victory which wouldn’t have been possible without my incredible team, who protected me all day long and guided me excellently in the final part of the race”, an ecstatic Julian said at the finish.

France and Alaphilippe had been the main instigators of Sunday’s 268.3km race from Antwerp to Leuven, the team of the defending champion going on the attack with more than 180 kilometers to go. This move had Kasper Asgreen, Tim Declercq and Remco Evenepoel come across and put pressure on a peloton who was forced to chase hard for more than an hour in order to bring it back together.

Attacks kept coming even after that group was reeled in, but a first proper selection was made 58 kilometers from the finish, when Julian put the hammer down on the Bekestraat, blowing the race to pieces. Several riders managed to come across, forming a strong 17-man group which also featured Andrea Bagioli, Evenepoel, Florian Sénéchal and Zdenek Stybar. They quickly put two minutes between them and the large chasing group, in part thanks to Remco, who dug deep at the front.

After the young Belgian peeled off the front, France took over the reins and brought Alaphilippe in position, who danced on the pedals and got a small gap, before being reabsorbed. Two kilometers later, the reigning champion went again, but the result was the same. This didn’t deter him in any way, as with 17 kilometers to go the 29-year-old unleashed another blistering attack, this time on Sint-Antoniusberg ascent, and carved out a ten-second gap heading onto the last lap. Four riders tried to counter and formed a strong chasing group, at one point reducing the margin, but once the road went up again, so did Julian’s buffer, who entered the final ten kilometers some twenty seconds clear.

On the Wijnpers climb, the Frenchman continued to dance on the pedals and put more seconds between him and the first group down the road, and with five kilometers to go it became pretty much clear it was game over. Shaking his head in disbelief, that’s how Julian went under the flamme rouge, knowing that he had it in the bag and would get to sport the coveted rainbow bands for one more year, prolonging what’s arguably the best moment of his career.

“The plan was to counter in the final kilometers, but I sensed an opportunity and rode on instinct. As soon as a gap was there, I rode my heart out to remain at the front. The Belgian supporters told me to slow down, but that only motivated me to go harder. I left everything on the road, and while I was doing that, I kept thinking of my son, Nino. Winning the Worlds again is incredible”, said Julian after sealing one of the most impressive victories of his career and strengthening his amazing legacy by becoming just the seventh rider in history to win consecutive titles.